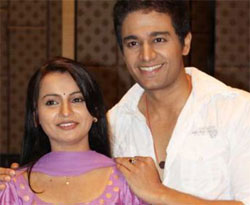 Zee TV and Filmfarm India's Dil Se Diya Vachan which offered a different take to the relationship of a mother-in-law and her daughter-in-law will go off air in the first week of April. The latest is that Hats Off Productions' upcoming show on the trials and tribulations of kids in an orphanage, 'Choti Si Zindagi' will be getting the 7 PM slot.

Our source states, "Dil Se Diya Vachan failed to garner TRPs at the early evening slot. The decision of Neena Gupta to quit the show, due to her ill health was indeed a setback to the entire team, especially because she was one of the pillars of the story line. It was the decision of the channel to wrap up the show. Dil Se Diya Vachan is expected to wind up on April 2nd".

When contacted, Gaurav Khanna the protagonist said, "Yes, we have also heard that the show is ending".

We tried contacting Producer Pintoo Guha but he was not reachable.

Producer J.D. Majethia seemed clueless about the slot that his show was due to get and said, "Currently I am not sure about the time slot, as I am given to understand that there are three time slots in consideration, of which the 7 PM slot is also one. I have also heard the buzz, but I am yet to receive any official word from the channel".

As per our source, Choti Si Zindagi will launch on April 4th at the 7 PM slot on Zee TV..

We tried contacting Sukesh Motwani, Fiction Head, Zee TV but could not get thro' to him.

9 years ago Miss u & luv u loads Gaurav... Soo sad that DSDV ended earlier than expected... did not see enough of Prem & Nandini together, especially sharing happy moments... too short!! :((

9 years ago So sad that DSDV is ending suddenly!! It had such a good concept and cast... Going to miss them all, especially Gaurav...luv u GK:(( Wish them better luck for the future...
When I see all the publicity done around some new shows, I am more and more convinced that DSDV has been victim of some sort of injustice & manipulation!!!

preet555 9 years ago Great story, concept, and a wonderful message to the public!!!!! Vandana was wonderful for her first acting job!!!!!!!!

9 years ago Going to miss this show. this show had good concept and good cast. Gaurav luv u and see u in another serial asap. will miss gaurav very much.

Gooden 9 years ago Sum ppl here r hell bent on digging up their own graves by playing the "disliking" game.......cover up people... your immaturity is showing!!

Vandana, for a newcomer, did well.
Though the surprise package for me was Abigail ! I'm gonna miss her.. Hope to see her back in some new show. :)

And m going to miss Ajay C too , despite Krushna's psychoness :(

+ 5
9 years ago Really upset with this news, unable to accept it. This show had everything going for it...a good concept and a great cast! Will miss all of them....they were so perfect in the setting!

Vandana too picked up so well....she improved a lot over time and has talent....it must have been tough to play the role of Nandini as her first one!

Wish all of them the best and hope to see all again in other shows....

And Neena G, get well soon!

9 years ago Gaurav, i am sure that u can play any charachter nd that role will be loved by us. Luv u nd all the best for future.

9 years ago With due respect to everyone who feels Gaurav should go back to his previous roles(i understand that his roles have become unforgettable),i know u say this coz u are huge fans, but i feel a versatile actor like him doesn't deserve to get typecast...Even i have loved him in all his roles, but as an artiste he should enjoy creative freedom:)