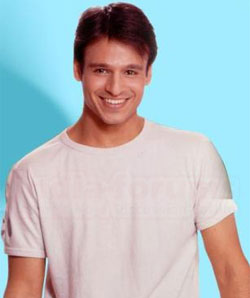 Mumbai, Jan 14 (IANS)  had apparently been almost ousted from his debut film 'My Name Is Anthony Gonsalves' when a corporate house that director E. Niwas approached to produce the film insisted on signing Viveik Oberoi.

When confronted, Nikhil told IANS: 'I wouldn't like to name anyone, but an actor who was very hot and happening a few years ago did want to do 'My Name Is Anthony Gonsalves'.

'Director Niwas was very clear that the script would only work with a newcomer, and that too me. He threw all caution to the winds and decided to produce the film on his own along with Sahara One.'

Nikhil claims to be a diehard Amitabh Bachchan fan.

'I remember as a child watching Mr. Bachchan in 'Suhaag'. Today it's a coincidence that my debut film gets its title from a popular song in a film featuring Mr. Bachchan.

'That isn't all. No one knows this. But I was actually supposed to make my debut with a small role that Niwas had offered me in an Aftab Shivdasani-Esha Deol romance called 'Jaane Kaise Kab Kahan', again a song from a Bachchan flick. I love that title, and I've asked Niwas to give it to me for a future film,' gushed the newcomer who claims to be finely tuned to every detail about Hindi cinema.

Fortunately, for Nikhil, he desisted from playing the bit role of Esha's fiance in the shelved film.

'What has to happen will happen,' philosophised the youngster.

Nikhil, who plays a bartender and a Bollywood struggler in 'My Name Is Anthony Gonsalves', is all praise for his co-star Amrita Rao.

'Five years have passed since she came into the industry. Even today, Amrita's hunger and anxiety to excel in every shot remains unchanged. I like that. Somewhere I too want to be insecure even after 25 films.' 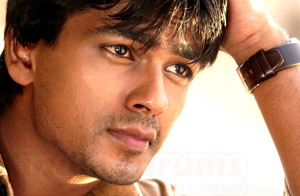 In fact, Nikhil has already got three more films in his kitty.

'One is a remake of Rahul Rawail's 1978 Sunny Deol starrer 'Arjun', which Shivam Nair is directing and Anurag Kashyap is writing.'

The original film about an unemployed youth being sucked into politics and corruption is no longer valid. Hence, Kashyap is rewriting the script for Nikhil.

'Unemployment is no longer a burning issue,' said Nikhil. 'Today, with so many avenues of work for youngsters like call centres, I think 'Arjun' needed a new interpretation. Besides, 'Arjun', I have two other films to be produced byK Sera Sera and Sahara One.'

Nikhil seems to have found the most appropriate godfather in superstar Shah Rukh Khan who apparently has taken the newcomer under his wings. He apparently hangs around the superstar.

'I think too much has been made of Shah Rukh's interest in my career. It isn't even a fraction of what it's made out to be. Sure, his company Red Chillies is the line producer of 'My Name Is Anthony Gonsalves'. But that's because he believed in the project. Beyond that Shah Rukh's interest in me and my career, I think,is reasonable and very sweet. He did release the music of my film. Wouldn't he do that for any newcomer who requests him to?'

Clearly, this newcomer has put his act together.

'I'm aware that 2007 had a large number of male newcomers. Should I be happy to be coming in 2008? I don't think so. All films and actors have their own destiny. How audiences accept me doesn't depend on the competition, but on my intrinsic merits. I'll survive not because of competition or Shah Rukh's backing, but only if audiences approve of me.'