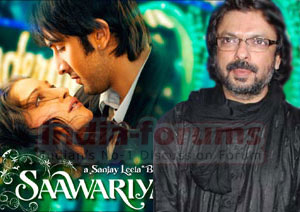 Sanjay Leela Bhansali has said that the media has been unfair to 'Saawariya' by being too critical of it. When Bollywood's best known publicist Dale Bhagwagar was asked about his comments on the 'Saawariya' debacle, he pointed out that the fourth estate indeed had the most influential part to play. "It is a fact that the media played the biggest spoilsport in the entire 'Saawariya' fiasco," said the PR guru.

Dale further analyzed, "Due to various reasons, many in the media have had a certain impression of SLB from a long time. Topics like 'his attitude' and 'favouritism' have often been discussed in media circles. Adding fury to fire, immediately after critical reviews of the film, SLB's PR machinery started working overtime with an outrageous in-your-face strategy."

It can be recalled that after being slammed for the film, Bhansali had made statements like "Saawariya is the biggest hit of my career so far" and "Media manipulation won't kill my film". So was the director ill-advised? "There is a high probability that people around him, misguided him. And he might have got carried away. His post-release statements in the media only added to the media's discomfort and the Press emerged with stronger criticism for the film," the publicist comments.

It's so true! Unfavourable follow-up reports added to the dismal state. By the end, it has turned out to be a heavy price to pay, for both Bhansali and the film.
Featured Video