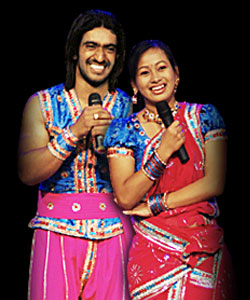 Zee TV's DID Doubles is now synonymous to shockers as with every surprising performance comes  the news of a stunning elimination!!. This week is not different at all, as after giving a thunderous performance last week, the axe fell on Surya and Sneha from Marzi Ke Mastaane..

But the buck doesn't stop here!!!

Niharika and Vikram from Rajeev Ke Rockers performed on a traditional number composed by Geeta, on a Holi special act with colour for which they used Kumkum as gulaal.  But the prop turned unfortunate for Nihaarika; she had a breathless feeling and literally choked with the intake of powder into her throat and nose while dancing. After the performance she ended up vomiting and finally fainted under the exhaustion, after which she was to be provided with an oxygen support.

DID has always staged unmatched performances with limitless stunts and dancing. But now it is time to take care about the safety of the contestants when it comes to props and stunts.

Catch all the dance moves and also the unfortunate elimination in the weekend dose of DID Doubles on Zee TV.

+ 4
9 years ago Suriya n Sneha should've got eliminated much much earlier , they can't dance well.Rajeev is fantastic choreographer.

9 years ago i think amit-falon, prithvi-vivek and maybe karan-carling and vikram-niharika are the best couples this season!
i really wonder how vivek and saurabh got so many votes!!!! theyre still not as clean as many other contestants!

9 years ago At this point, everyone is very good dancer so any exit will be sad news I believe...

All the best to Sura and Sneha, they are great dancers.

9 years ago @samicute,we al know dat she doesnt read any of tellybuz article,but wat kind of blindness is it dat she dosnt even read the heading.its clear its a sad news about elimination...c was hilarious n now irritating.

9 years ago am not happy with this elimination...they were very good dancers...