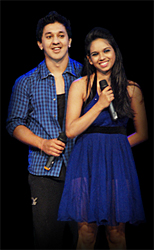 Retro flavour strikes Zee TV's DID Doubles this week, as the mentors will pay tribute to the greats starting from Raj Kapoor-Nargis and Rajesh Khanna-Mumtaz to Anil- Madhuri and Shah Rukh-Kajol!

Rajeev ki Rockers who got a double blow in the last two weeks got to breathe easy this week!! However, it was a bad day for the talents from Geeta ki Gang, Abhinav Gusain and Sangeeta Mandal who had to bite the dust..

This week was special as the enthusiastic masters took to the stage to perform on the ever green classics like 'O Haseena Zulfon Waali' and 'Yaahooo'. Geeta donned the role of the 'Dream Girl' Hema Malini, while Marzi was the ever green hero Dev Anand. Rajeev Surti became the wild and energetic Shammi Kapoor, and our dear hosts Jay Bhanushali and Shweta Salve spoke in the styles of Gabbar Singh, Dharmendra, Ranjeet, Pran and Shashikala..

Catch the Retro style this week, in Zee TV's DID Doubles..

shivani003 9 years ago I had loved their Frankenstein act. This jodi had potential to do well! Sad they r gone :(

Abhinav reminded me of Jack....

tulipbaby53 9 years ago I'm sad to see them go! They were really good.

--jassi-- 9 years ago I accidentially clicked this, and now I found out! I wanted to keep it suspense! Awww! Really liked them though...

LimitLessFan 9 years ago they were good..... i was expecting surya and sneha would get eliminated

Neil Bhatt talks about prepping up for Ghum Hai Kisikey ...
-3 seconds ago

Pooja Bhatt: "Alcohol was my drug of choice", Opens Up about ...
21 minutes ago