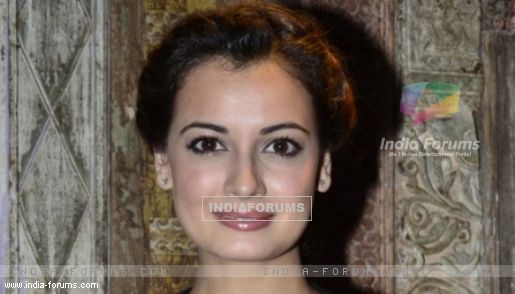 The event - part of her pre-wedding ceremonies - was held in the capital Thursday. Dia, who is marrying filmmaker Sahil Sangha Saturday, seemed happy and excited in a marigold yellow chanderi multi-panelled kurta.

Describing the intricacies of the regal looking outfit, Ritu Kumar said in a statement: "The kurta has a vintage cut used in the courts of Agra around the 15th century. The neck is deep and worked in embroidered gota patti on net like the technique used at the time.

"The gold metallic taar used is of silver worked in gold thread and dori to give it a stylised plant inlay look. Each panel is highlighted with a flowering buta. The odhni is fuschia worked with small butis of the same beaten gold gota patti, a fuschia brocade deep sinjaf finishes the edges of the outfit."

Dia also gave her fans a glimpse of the ensemble by posting a photograph on her Twitter page. The photograph features Dia standing all smiles with her fiance Sahil.

In an accompanying message, She wrote: "With my happiness :) thank you to all those who have conveyed such warm messages here. Sahil and I are grateful."

The radiant beauty, crowned Miss Asia-Pacific International in 2000, has featured in Bollywood films such as "Rehnaa Hai Terre Dil Mein" and "Parineeta".

Known for her dedication to environmental and social causes, Dia is also a film producer. Sahil is a filmmaker who directed "Love Breakups Zindagi", the first movie under their jointly owned banner, Born Free Entertainment.

The duo got engaged in New York earlier this year.