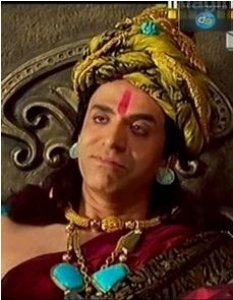 It's definitely a bad news for all Dhananand (Sooraj Thapar) as soon the character is going to end in Imagine TV's Chandragupta Morya. Yes, you have heard it right; the evil personality from Chandragupta's (Ashish Sharma) life will soon take an end.

"Later on, with full preparations and planning Chandragupta would attack Dhananand's kingdom and there Dhananand would breathe his last. With this character of Sooraj Thapar would end too."

There is quit sometime for this development but we cannot change the history.

We contacted Sooraj Thapar and he says, "I really don't know about this after all its history and my character has to end one day."

With this its end for Thir Kit Dha…

9 years ago bt it will take lot more tym I guess!
chandragupta takes his kindom @ very end na i guess!

+ 2
9 years ago this guys is the most enetetaining on the whole of imagins channel...please let him live for some more time
he is too comical with his mannerisms n poetic way of talking :-)

9 years ago no why so early i wanted CGM to lose more than 1 battle against dhanadand i wanted to see more of acharya yojnas and none of them working and then acharya figuring out fault in his strategy, also wanted to see great fight between bhadrasaal and CGM

+ 2
9 years ago Ono!!!
Dhananand...the comical,evil & the musical character is gonna die!!!
We will miss soorajji!!

+ 3
9 years ago ye to honahi tha...thank god atleast they will show cgm will defeat at first and then will win

+ 2
9 years ago Oh no! though we know that it will happen but still we will miss Sooraj ji!

9 years ago hmmm... well this day had to come now or later... chalo its good that we will get some time to prepare ourselves for this big SHOCK!!!