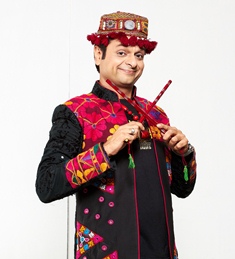 India's first light-hearted entertainment channel, Big Magic is all set to celebrate one of the most auspicious festivals: Ram Navami. Following the week-long celebrations of Chaitra Navratri across its primetime shows, Big Magic will culminate the festivities with a bang! Catch the witty yet entertaining performances by Devang Patel in a blockbuster Mahisagar Maha episode, this Tuesday 8th April 2014.

A light-hearted relationship drama set in the hinterlands of Gujarat; Mahisagar revolves around the life of Mahi, a sweet, carefree small-town girl who is pitted against her politically distinguished mother-in-law, Ansuya Mehta, when she falls for Ansuya's son Sagar. What follows is an entertaining and light hearted drama of the heart v/s the brain between mother-in-law and daughter-in-law, with the son caught in between.