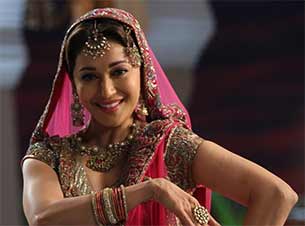 Madhuri Dixit starrer "Dedh Ishqiya" is not a run-of-the-mill story and its makers have put in place a unique and smart marketing strategy to promote and build up a pre-release buzz around the movie.

The film is scheduled to release Jan 31 next year and Mansi Maroo, who has co-produced the black comedy with Vishal Bharadwaj, says the focus will be on the Hindi speaking belt during its promotion.

"We are working on the promotion and marketing strategy of the film. We are planning to release a couple of teasers by the next week and will launch each character one by one," Maroo told IANS.

Directed by Abhishek Chaubey, "Dedh Ishqiya", a sequel to the 2010 hit "Ishqiya", is based in a small town in Uttar Pradesh, just like the original.

"Since the film is based in a small town and has a lot of Lucknow (Uttar Pradesh) culture in it, we will focus a lot on the Hindi belt. A lot of attention will be given to the rural areas during promotion. This is just the beginning and yes, there is a lot more in store," Maroo said.

The film will see 1990s diva Madhuri returning to the big screen as Begum Para, an attractive yet dangerous woman.

Chaubey has also roped in Naseeruddin Shah and Arshad Warsi, who were there in the original, along with Huma Qureshi.