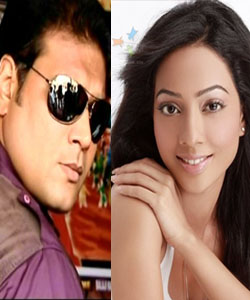 Sony and Fireworks Productions' long running crime series, CID will see a twist in the tale with a personal track of one of the senior-most officers in the team!!

Yes, we are talking about Daya (Daya Shetty)'s love track that started last week!! For the uninitiated, Melanie Pais who essayed the title role of Kashi in the Imagine show post leap was introduced last week, wherein Daya saves her from falling off the escalator. It was shown that Daya falls in love with the girl.

We hear that this track will be taken forward this week, and will take to a new high with the wedding of Daya happening with the girl Ansha, played by Melanie.

Our source tells us, "This week, there will be more interactions between Ansha and Daya, which will lead to a cute love story. Amidst all this, it will be identified by the CID team that Ansha's cousin brother Bunty is involved in some crime. When Daya and Ansha decide to get married, the entire team comes in way of this marriage".

We hear that confusions will worsen when ACP Pradhyuman (Shivaji Satam) will give two options to Daya, one is to marry Ansha who is part of a family with a dark past, and the other is to continue to be part of the CID team.

If sources are to be believed, Daya will tell ACP that he will marry the girl whom he loves, come what may. This comes as a shocker to the CID team.

Our source further informs us, "Daya and Ansha's wedding happens in a lavish manner. This is the first time in the history of CID that they have shown an officer getting married. So this has been shot on a big scale. However, there will be a twist to the tale once the wedding culminates".

We tried calling Daya Shetty and Melanie, but they remained unavailable for comments.

Will there be anything drastic happening in the life of Daya and Ansha?

Watch CID this weekend to get your answers..

bhargavi789 8 years ago u and abhijit sir r the most dashing and
hansome officers in cid!!

yipee 9 years ago aww thats cute....hope its a cute love story and nothing bad happens

amrjeet 9 years ago good work melanie..............it was good drama cid need this kind of drama how long it wll b the same old cid

..CrazyInLove.. 9 years ago aww. so cute
looking forward to this.
they should also show more scenes of Abhijeet- Tarika and Vivek-Tasha

big_vikrant_fan 9 years ago always wanted to see something as sweet as a marraige in a serious show like CID. going to keep my fingers crossed and i just hope that girl doesnt break his heart.

pooja2011 9 years ago I always wanted to see Daya Love story bt i hope his heart not break again.....

FarzuIrani 9 years ago I always wanted to see Daya Love story but not this way hope his heart does not break at the end.