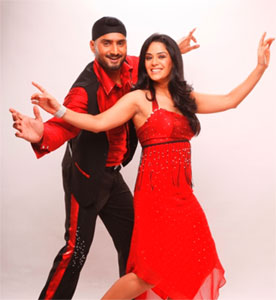 Featured Video
In conversation with Telly Buzz, is one pair of the contenders, leg spinner Harbhajan Singh and our very own favorite Mona Singh aka Jassi.

Not only on screen but off screen too, Mona and Bhajji are very comfortable with each other. “The secret behind this is that both of us have similar backgrounds and hail from the state i.e Punjab. We share the same tastes in food and have similar likes and dislikes. I think that's what clicked between us. We have enjoyed the whole journey of EKEH”, says Mona.

What kind of chemistry can the viewers expect between the duo?  “Well, you will definitely see sparks and chemistry between us on screen. But as far as the off-screen realtion goes, its just good friendship! Even though the shoot of the show has wound up, we still keep in touch with each other through messages or calls”, chirps the actress.

And what was your reaction when you heard that you were being paired with Harbhajan? “When I was offered the show I was quite excited about the prospect of dancing with cricketers. And when I came to know that Bhajji was going to be my partner, my excitement level doubled”, laughs Mona.

Mona was last seen in Jhalak Dikhla Ja as a contestant and also the host, but is now back to dance again with EKEH. However, this is Bhajji's first stint with television. How was his support while dancing? “Oh, Bhajji is very hard-working and committed. He used to practice for 10 hours a day and it was thanks to his support and hard work that we managed to clear the rounds in the show. He never gave any excuses and rehearsed everyday”, replies Mona.

When it comes to dance forms in the show, viewers are bound to notice some Punjabi tadkas with the two. “Yeah that's because apart from bollywood songs, we have danced to quite a few punjabi numbers too”, says Harbhajan. Ask him when was the last time he danced and he cheerfully replies, “It was when we won the One day Test series in Sri Lanka. All the boys danced together in the green room”.

Who do you consider to be your toughest contender? “Well all of them are tough competition”, says the duo. Mention Sreesanth's name and Bhajji very diplomatically says, “Sreesanth is a very good break dancer. If he performs alone, he will definitely score more than us, but as a duo it's a different story. A pair needs to have good co-ordination and synchronization and I know for a fact that me and my partner are good at it”.

How were Sushmita and Wasim, when it came to critiquing and grading the performances? Did Wasim give any handy tips on dancing? “Wasim did not give any tips on dancing. He is well aware about the difficulties a cricketer will face when it comes to dancing. Susmita, on the other hand knows the nuances and technicalities of dance, having spent so much time in the industry, she carefully points our mistakes”, states Bhajji.

What's more difficult, cricket or dancing? “For me, playing cricket is more difficult compared to dancing. In cricket you are under tremendous pressure. I feel anybody can dance, but not everyone can play cricket”, claims Bhajji. Mona reiterates the same as she says, “I agree with him. When I started with Jhalak, I did not know that I could dance. Now in EKEH, I feel like Bhajji's choreographer”.

Ask Bhajji whom else would he like to dance with, apart from Mona and pat comes the reply, “I would love to dance with Madonna”. Mona, on the other hand, is very happy being with Bhajji as she says, “I don't think I could have had a better partner than Bhajji. I am quite happy to dance with him”.

How important is winning to you? “When it comes to cricket, winning is everything. When I dance, it's more about enjoyment. I am having a lot of fun here and winning is not so important for me. But yes, for Mona, it is extremely important”, verbalizes Bhajji.

Lastly ask him the best compliment he received from the judges, Bhajji replies, “That I am improving everyday”. On an ending note, Mona adds, “The USP of the show is the rare combination of cricketers and television actresses. I am positive the show will rule the audiences' hearts”.