'Nachle Ve with Saroj' and Terence has been in talks since its promo had been aired. But at the same time, we did not have any idea what the show is all about. We know that the first season had common people in the show and the dance lessons were mostly for Bollywood numbers, which were simple enough so that the viewers also learnt it easily. But what about season two? 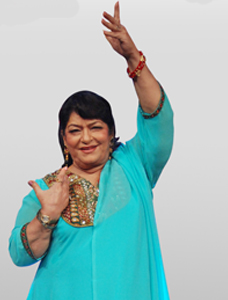 After feeling at home with Imagine team, we had a small chat with the Dance Guru Saroj Khan herself.

She said "There is not much difference for me, as I am dealing with the same style of dancing and one thing I have to do is to take it further."

Well, we are happy to know that but we would like to know what the show is all about? "I don't know anything about the show this season and I am doing what the channel has asked me to do. And as Terence and I are not shooting together, I cannot comment on his style of choreography. We will be meeting only once a week in the show and that too for performance and working with him is a pleasure. He is not new to me and he is a child and we both respect each others' art and work."

This time there are various celebrities involved in the show, including professional dancers from various reality shows. Having them in the show would be definitely a fun to watch. Regarding this the Guru says "Having professional dancers this time in the show is definitely an added advantage and the celebrities are good in their own way and my personal favourite is Neha Marda (Gehna of Balika Vadhu). And this time there are four other background dancers too."

Since we have two dancing legends, Saroj and Terence in the show, we will get to see a variety of dance styles being performed by the dancers. But what is the judging pattern? "After the performances, there will be four winners at the end of every week i.e. by Friday and they will compete with each other in the segment called as 'Sitaron Ki Takkar'. From this segment we will select one winner and the winners from each week will perform in the Grand Finale" she adds.

The teachers are not competing with each other given that they are the ones who have to make their teaching better and the show is a mixed bag of different styles of dance.  From what we know from Saroj Khan, we are sure that the show will be a 'Dance Cocktail' and people cannot afford to miss it.

+ 2
10 years ago thats cool...looking forward to the show this time

10 years ago The only reason I will be watching this show is for Supriya Kumari. Hope she remains till the end and performs well. Really loved her as Amoli in Bairi Piya and have been a fan since then.

roshnimv 12 years ago Shahid is very very good actor. I have loved his work in all the flims. He will be amongst the best very very soon. Not to forget he is amazing Dancer!!!!

12 years ago he is a good dancer though! might have some of the skill that harman and hrithik hv! coz thy are just wckd!, actrs and dancers! dnt mean to sound rude! anyway, gd luck to him!

12 years ago he is a good actr! but i dnt thnk hes the best! even though i like him! Some of the best actrs i think are akhshay, amir khan, hrithik and sharukh! if he can gt to thm thn...!