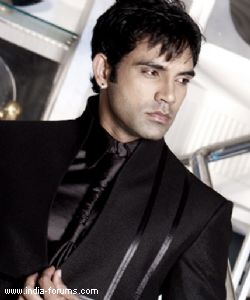 Our television industry has lot of hidden talent with the actors and one of the best examples would be our guy Dakssh Ajit Singh, who is seen as Gaurav in Star Plus's Maryada. A latest buzz has come to us is about his hidden talent which was recently opened up in public.

A source conveys to TellyBuzz, "Recently the show experienced a dream song sequence for Gaurav and Vidya's (Vindhya Tiwary) first night, where Vidya fantasizes herself along with Gaurav on a very romantic song. But the real buzz is that the song on which the dream sequence was shot is actually composed by none other than Dakssh himself."

It came as a surprise for TellyBuzz; therefore we contacted Dakssh to know more on his hidden talent. "Yes, actually I am a poet, I love writing poetry since childhood. This talent was known by my producer, so he suggested me to put down my pen for a dream sequence and try my hands on it. So, I written the song which was too liked by everyone and finally it was beautifully composed."

"It was not sung by me but a guy named Udhav," Dakssh adds.

Talking about his feelings for the songs and compositions, Dakssh goes on, "It was awesome experience to compose a song for my own show as I always wanted to be a lyrist and got this opportunity in the show."

That is something appreciating Dakssh, Keep it up!

Deepika_Wader 9 years ago Hiya Dakssh, have to say, you are a pleasure to watch. Im from London and have never missed an episode of Maryada because i love your acting together with Vidya. You too are amazing to watch.

she_ratchet 9 years ago OMG!! Awesome!! U should continue

Shaina_b 9 years ago Seems like he is really multi-talented!!!!

KhaLidaH 9 years ago wow nice and ur doing fantastic act in maryada. All the best

.Angel 9 years ago he is a super star and it was amazing