View Profile
An exclusive review of the popular musical based talent hunt show SA RE GA MA PA by Barnali. Catch weekly update of this show, opinions on participants performance, judges anlaytical review and predictions on which particpant will go out every week. 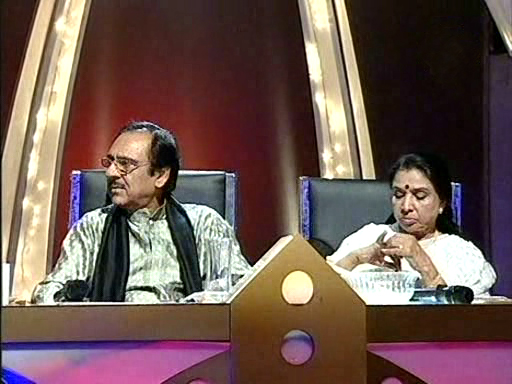 After the brilliant performance of US girl Mauli Dave last Saturday, the expectations from SRGMP C2007 show had gone up a bit for the viewers. Dashing the high hopes, the fare churned out by Zee this week on SRGMP turned out to be extremely dissapointing. Though the missing spark of the show is understandable as it has just started and everyone is trying to settle down but what to say about the pathatic performances by the contestants and the non-stop drama created by few mentors especially Himesh! Even though the drama was expected but seems this time round it started too early and with the judges also jumping in, somehow it gave an impression of a totally scripted reality show!! If drama is the key word, then why watch a reality show, why not watch the family drama’s instead !

Besides the drama, some of the mentors were over critical and condescending, undermining the confidence of the already nervous participants. Even judges at times were taunting. I am yet to understand the comments made by Ashaji on Koyal’s performance. No doubt Koyal gave the worst performance with the song “Rock Me Baby” but Ashaji was giving more importance to the lyrics of the song rather than making the actual abysmal performance as the reason for their judgment.

Every contestant failed to impress this week. The ones, who got through, did so, by just sheer luck. After the Friday’s episode, the Saturday’s one was marginally better. But on the whole their performance is not worth speaking of. This platform has produced some really good singers and I just hope these contestants don’t reduce the standard of this huge platform.

Finally the winner of this week, even though eliminated, was Yogi (Yogendra). Although he had to face so much flak from his own mentor Himesh, he went off from the platform with full grace and received a standing ovation from all. The highlight of the whole week’s show perhaps was the last few words of Yogi and his father’s singing “agar tum na hote”. That was the only real part it seems and it touched the heart of the millions watching it. One question to ponder after seeing Himesh’s reaction this week is, if Himesh actually had so much reservation against Yogi, then why did he choose him in the first place? It actually makes you wonder what this mentor has up his sleeves this time – (or under his cap?). Has it got to do anything with the introduction of the Ekalavya Gharana, which is nothing but a mystery to the viewers at the moment?

So summing up in a nutshell, this week’s show was totally mediocre and disappointing. The songs selected were not right for the participants, the performance was absolutely ordinary, none of the songs rendered touched the heart and drama was galore. Hopefully next we might get to watch some good performance with the Pakistani singers and everyone’s favorites just now – Mauli Dave.

smallwonder 13 years ago thnx for a great synopsis!! i liked srgmp - the first episode was not good, but after that it has been interesting... lets hope for the best!!

ammmu 13 years ago Great job Barnalidi, it sums up everything perfectly.. expecting much better performances next wk :)

snowflake0555 13 years ago Great job writing the article Barnali di!! I also agree with you about the drama...

gk_09 13 years ago I myself was not impressed with SRGMP 2007. Hopefully things will be cleared up and we have a great year like last time.

Thanks for the article Barnali Di.

IBserenity 13 years ago Wow, very well written!
I agree with the Ashaji comments...she doesn't speak much english so the only thing she couldv'e thought was that the song was bold and in english...i don't think that's a criteria to judge someone's singing...infact it's a personal bais...but let's see wht happens, maybe HR will tone down the drama a bit.

simtara 13 years ago Well written Barnalidi. You're quite right on all accounts. Glad to see someone sharing similar thoughts [:)]

vasamv 13 years ago Perhaps HR is trying to promote Yogi in his own disorted style.Yogi is really Achha admi,but what has it to do with singing? That is the real Brahmastra from HR.

nsheena 13 years ago well written! Me too felt tat the show was too full of drama. Newayz, hope v get 2 c btr singers

advil 13 years ago Di,
Good job, and that just about defines the whole show in a nutshell.