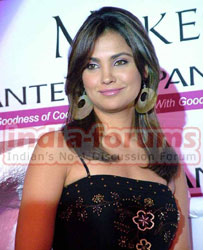 Lara is dying to do a period film. And she's on the verge of signing one. However, Lara's arch-rival Bipasha Basu's chances of doing a period film are receding. Raj Kumar Santoshi's 'Ashok' and Rituparno Ghosh's 'Draupadi' have both have been shelved. And Ben Kingsley's 'Taj Mahal' project, which will feature Bipasha as Jahan Ara and Aishwarya Rai as Mumtaz Mahal, doesn't seem to be anywhere near getting started. Bipasha will just have to be happy playing very contemporary women, like the one in 'Race'. "Abbas-Mustan keep casting me as these morally ambivalent women, first in 'Ajnabee' and now in 'Race'," Bipasha laughs throatily. There's talk of a sequel to 'Race'. No, it will not be called 'Disg-Race'. It will bring the entire cast together again. Except poor Akshaye Khanna who dies at the end of 'Race'.