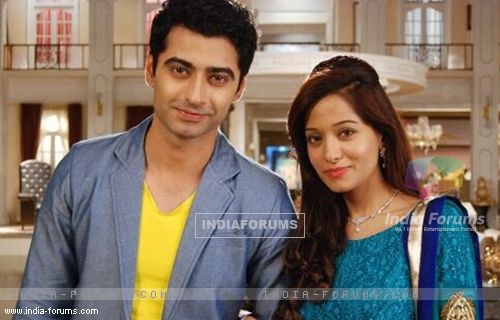 It's time to celebrate and cherish the memories of Fortune Productions' much loved show Beintehaa as the show celebrates its first anniversary today. Though the show went off air abruptly, but it's still being missed a lot by the fans and they are demanding the next season of the show.

The good looking guy Harshad Arora and pretty girl Preetika Rao who made their debut with Beintehaa, became very popular amongst the fans and now are being missed a lot after the show went off air. Zain (played by Harshad Arora) and Aaliya's (played by Preetika Rao) cute nok jhok scenes were much loved by the fans and the duo who are said to be the mastikhors of the sets, created a magical chemistry on-screen. The show portrayed all sorts of emotions like joy, sorrow, romance, pain of separation and many more.

The show also had a good bunch of popular actors as a supporting cast like Suchitra Pillai, Ritu Raj Singh, Riva Bubbar, Namrata Pathak, Gunjan Vijaya, Vivek Madan, Shivangi Joshi, Naved Aslam, Vikas Grover and many more. The show is in high demand for a season 2 after it went off-air.

Preetika Rao, who essayed the character of Aaliya feels very nostalgic on the occasion of the first anniversary of the show and she says, "It just gets me back to day one! On 30th December the entire cast and crew of Beintehaa watched the first episode together on a huge screen at a private launch celebration. While on the 31st we were literally filming the party sequences of New Year's Eve and the inner portions of the Bhopal Cruise at the Cherish Studio in Mumbai. Yesterday Anupama Gupta - a Beintehaa fan - tweeted saying that she has landed at the tourist spot in Bhopal that was named Gauhar Mahal in our show and that she was standing at the same fountain spot where Zain says for the first time to Aaliya "Bolo Haan Ya Na?", Now that really made me nostalgic about the initial few days of Beintehaa! And it feels so good that fans all over the world are celebrating the 1st Anniversary of this show on social networking sites with so much love and fond memories."

Harshad says, "I started my acting career with Beintehaa and this show is the best thing happened to me. I have also been awarded for best actor for my acting in Beintehaa. The show will always remain very close to my heart. The last day of shoot, took me back to my first day when we started shooting for the show."

TellyBuzz wishes a hearty congratulations to the team of the Beintehaa!

+ 2
6 years ago Harshad Arora & Preetika Rao missing you both so much so is Beintehaa.

6 years ago Can never forget this show! Beintehaa was just different and unique

6 years ago No show can replace BI's place from my heart...missing entire cast badly... Especially Harshad and Preethikaa..

6 years ago Missing Beintehaa so much
wish it could complete a year atleast!

+ 2
6 years ago Missing Beintehaa so much! The show was one of a kind and did very well despite being the underdog... Hoping to see Harshad Arora and Preetika Rao back in Season 2 if it ever happens...All the best to the whole cast for their future projects!

+ 4
6 years ago Missing Beintehaa every day. Preetika Rao and Harshad Arora's chemistry as Zain and Aliya is something almost impossible and too magical to describe in words. Happy one year, BI. Miss you hamesha xoxo

6 years ago Happy 1st anniversary!!! Miss my ZaYa. Hopefully will get to see you soon onscreen Harshad Arora and Preetika Rao