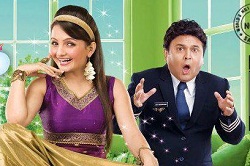 Jeannie Aur Juju premiered on SAB TV yesterday. Last week we uploaded snippets on Giaa Manek and Ali Asgar who play the Jeannie and Captain Vikram Khanna respectively. Here is what the side characters have to say about their roles:
Featured Video
Harsh Khurana plays Captain Virendra Lakhanpal (Vela): Vela is Captain Vicky's a colleague and best friend. However he is also slightly street smart. As per the script there is a healthy competition between the two friends- he sometimes succeeds and at times fails. I like this role as it has innocence and simplicity.Jhuma Mitra plays Durga Chatur Ganguly:  She is like a Royal Bengal tigress in the sense that she  likes to dominate and take the upper hand on her husband. Her husband is a writer who gets influenced by real life characters. However, he has a bad habit of peeping into other peoples' houses. Durga's duty is not just taking care of the house but also managing her husband who is a peeping Tom. Mr and Mrs.Chatur are Captain Vicky's neighbours and when Vicky comes back from the plane crash we are very concerned about his health. Simultaneously  Mr.Chatur claims to see a woman there but Durga sees no woman. She feels her husband is making up stories and trying to womanize- which she feels is not done. Ultimately as the story goes on we will get to know about the existence of Jeannie. Despite being a Bengali I am still a hardcore Mumbaikar- so I had to work on having a Bengali accent in this show. Also I had to practice draping a saree in the Bengali way. It is always nice being close to your motherland and that is the closest I got.Jiten Mukhi plays the boss: In this show I play the character of the boss who is supposed to be the parallel female lead Priya's dad too. This role is about a dynamic person who has always succeeded in life. Nevertheless he believes in the being pennywise and pound foolish. He keeps on doing cost cutting with his staff. He is a happy go lucky chap in life who knows about Vicky and Priya being in love with one another and always wishes that they get married. When Jeannie enters Vicky's life he becomes very suspicious about him being involved with some other girl.Kurush Deboo who plays Dr.Cyrus Doctor: I play a psychiatrist paradoxically with obsessive compulsive disorder. Cyrus is simply obsessed over cases. He has a complete obsession to find the causes and what the symptoms are till he solves the problem. He is studying the cases 24 X 7. He also has the habit of peeping into others' business. He does so as he always conducts experiments with human behaviour. That is why he is peeping into others' business. However he is a very sweet person as he is the antagonist but not a villain. It is basically a conflict between magic and a science of psychiatry. He believes in psychiatric science instead of magic which leads him to believe that Vicky is suffering from some mental illness. In fact Vicky's case becomes his greatest obsession, in fact his addiction. Vicky in fact starts avoiding him. Nevertheless he is extremely caring of Captain Vicky. He wants to 'eradicate' Captain Vicky's 'mental problems'- however in the process he becomes a scapegoat and victim of Jeannie. Navina Bole who plays Priya: Priya is a rich man's spoilt daughter. She belongs to the South Mumbai kind of crowd. She wears Western wear as that is usually what spoilt rick kids wear- I think it's a stereotype which has stuck on in shows, so there is not much you can do about it. Maybe they wanted to give it a contrast to Giaa's character- she is in indo-western clothes. I am very jealous of Jeannie in the show. Priya is also a super possessive girlfriend who wants her way all the time. The jealousy is one of the moving factors in the show.

Comedy is something that I have always enjoyed doing. So even in Miley Jab Hum Tum, my character was on similar lines where I played Dia. In this show I am getting to pull off a character which has a lot of shades. At times she is really sweet and in love with Ali. Then she is screaming angrily.  She has a completely different equation with her father with whom she shares a soft and loving relationship.

For more interesting updates on the show please visit india-forums.com.

+ 5
9 years ago I like this show.. Gia is amazing, cute n charming :)
Ali's comic timing is an asset for this show, that's why they might have chosen him..
I'm loving both Jennie and juju..

9 years ago Great Show!Gia u r the best.The show is rocking.

9 years ago All the best for all the actors.Giaa super.

viji1972 9 years ago giaa j&j wld take u too great heights and we cld see u as versatile actor. in 2 days so much expression. hope u r enjoying and continue to entertain us.

9 years ago Giaa and Ali. What an awesome on-screen and off-screen jodi! Good luck to you both!