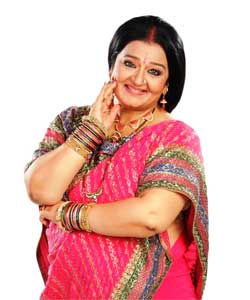 Seems like Neela Telefilms' Hamari Saas Leela on Colors has failed to impress the audience and the channel. The show which started off as a light hearted comedy was later on changed on channel demand to a typical saas bahu drama.

But even after the countless efforts taken, the show did not give an impressive performance in the TRP chart list. And we hear the show will bid adieu soon.

A source says, "Hamari Saas Leela will go off air by next month and the tentative date for the show to go off air is 16th of September. If ratings don't see an improvement in the next few weeks, the show will apparently be replaced by 24 Frames' romantic thriller or Rajan Shahi's Havan."

TellyBuzz earlier had reported that the production house is on their hunt in search of the fourth son of Leela. But the latest update is that there has been no development since then and finally the makers have decided to stop the search.

We also hear that Swati Kapoor who has been finalized to be the fourth Bahu of Leela has also not signed the contract as she is taking an overview of the show. She has asked the production to finalize and sign the contract only on the day of shoot.

We contacted Apara Mehta and she states, "Even I have heard about the show going off air, but no confirmation has reached us. So let's wait for a few weeks when the picture gets clearer."

We tried to reach Producer Asit Modi, but he remained unavailable for the comment.

Let's wait and watch what's in store for the show...

angeleyes26 9 years ago nooo 24 frames show should not replace it. RTMC show should be on prime time so that we get good trp. we want it after 8pm. let that havan be at 7. we have waited for so long now we cant have it on 7pm slot.

samikshachauhan 9 years ago i wud rather say that plz end any show on any channel but bring soon our rajat-mugdha show of 24 frames on air..plzzz

shruja 9 years ago Please end any show as on colors many shows r streching not doing tht well and plzzz give time slot to our RtMc show of 24 frames. we want to see it ASAP!! or production house please try for other channel as starone is getting stardesh n will be airing new shows

varsha112006 9 years ago 1 reason of happiness :) damini devi diwan is back in sajan re if hamari sas lila over :)

Keva 9 years ago Come on colors end LCL. LCL is doing very bad when it comes to ratings. Shubh kam mei deri kyun kar rehe ho
Apara mehta quit this show and come back to sajan re jhooth mat bolo you were fantastic in that show.