Fireworks Productions recently organized a 7 day outdoor shoot in the beautiful locales of Shimla and Kulu Manali for one of the upcoming episodes of their long-running show on Sony, CID. 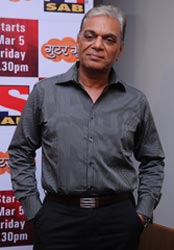 This was a very tough schedule, and the entire unit and cast went thro' an adventurous shoot in the most gruelling climatic conditions. The main aim of Fireworks Productions was to give the audience a different flavour in the episode, and to try out something that has never been attempted so far in television.

So how far were they successful? We ask the Producer, B.P. Singh himself!!

"This trip has given us one of the best shoot experiences. We have tried out all kinds of adventures; we have shot in waist deep snow, in the cold river and at great altitudes.
We had a shoot at Dhundi, which is 9300ft above sea level, which is situated 16 km away from Manali. This was a real tough shoot, and we had to bear the heavy snow there. We have shot at the River Veas, where the case opens up when the CID team get a body of a girl in the river", states B.P. Singh.

Elaborating on the places they covered, Mr. Singh goes on, "We have shot at Solang Nala, which is 19 km away from Manali. I have personally never seen a place as beautiful as this. We have shot at a popular mall there. For the first time ever, we shot a chase in the snow on ski. We hired a localite who could manage the camera well, for this particular sequence. This was a major shoot for us, for which three cameras were used. We also used snow scooters for another chase".

"We have shot one sequence at proper Manali, involving a taxi driver who is a witness. But to shoot the snow sequences, we had to go up so that we get the real feel. With the fact that none of us were trained to walk in the snow, I would say that we did exceptionally well. Now it is for the viewers to tell us whether they liked it or not", adds the Producer.

Talking about their experience shooting in the snow, he says, "We had put on the best of clothes. We had our gum boots on with two layers of socks inside. But on the first day of shoot, we realized that whenever our body touched the snow, we could not manage. We had no other option but to change our clothes. So from the next day onwards, we ensured that we taped our gum boots to our jeans pant, so that no portion of our leg came in direct contact with the snow".

B.P. Singh and his crew just returned yesterday from the gruelling shoot and are pretty geared up to give the finishing touches to the episode. "While it was a 7 day outdoor schedule, I have come to Mumbai after 17 long days. I had gone there earlier to make required arrangements", states a relieved Mr. Singh.

Even though the schedule went off very well, there were few minor accidents that happened. "One member of our crew had to be sent back as the person could not withstand the weather. But on the whole, it was a wonderful experience and we were really sad when we had to leave the place", he states as he signs off.

The episode shot in these beautiful locales will be telecast on March 26th.

CHOCOLATEBITE 10 years ago it was an excellent episode.i liked it sooooo much.well done MR SINGH!

10 years ago This sounds interesting! Looking forward to the episode! ;)