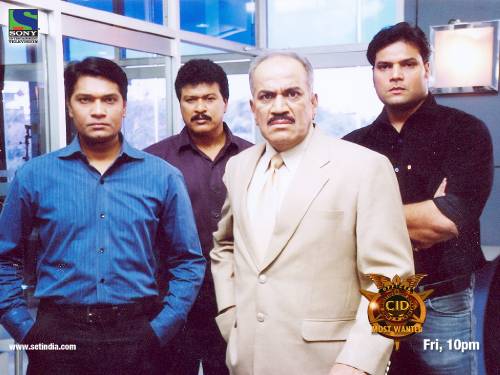 CID, the weekend series on Sony Entertainment Television, produced by Fireworks Productions is going strong even after thirteen long years, and this simply proves the amount of popularity the show, its actors and the entire unit commands.

While celebrating the completion of CID's 12 year run last year, Sony announced the CID Gallantry Awards, which was an initiative to encourage and honour acts of bravery in society. And now we hear that the channel and production house are planning the next big move of making a movieon CID.

Our source states, "The planning for the movie CID has been on for a long time now. But things have materialized and the movie is on now. The casting process is going on. The major cast of the CID team will remain the same, but there are plans of roping in a big face to play villain. The movie will be produced by Fireworks Productions and will be made exclusively for Sony Entertainment Television".

When contacted, Producer B.P. Singh told us, "Yes, we are making a movie on CID. It's quite an achievement of having the show on air for 13 long years. We are happy to take this next big initiative. The movie is in its planning stage now".

We sent a text message to Danish Khan, Marketing Head, Sony Entertainment Television, but did not get any revert till the time we filed the story..

Khichdi, the famous show of Hats Off Productions was made into a film last year..

abhijeet.bhai 8 years ago hay plzzz cast abhijeet sir he is the life of cid i love his acting he should be the only hero u know because no affence daya suck 4 sure

tashfia099901 8 years ago i'm very excited for the movie...may god bless cid just like he has always blessed

Princess13. 9 years ago i read somewhere that it might release at the end of this year

prettywomen22 9 years ago It will be a treat!!!!! Will watch the movie for sure and already cannot wait for it

Would love to see the movie of CID !

From Sid, Bunny to Ved, Barfi: Life Lessons that Ranbir ...
26 minutes ago