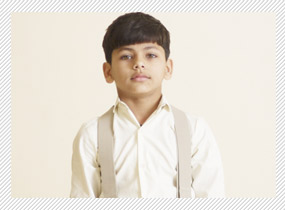 Child artist Siddharth Nigam was in for a shock when the makers of show Mahakumbh informed him of an underwater sequence as he didn't know how to swim. But instead of giving up, Siddharth took up the challenge and learnt swimming in four days.

Siddharth, who has also showed his acting prowess as the younger version of actor Aamir Khan's character in "Dhoom: 3" earlier, decided to learn swimming the very moment and asked for the crew's support. He also picked river Ganga as his practice ground instead of a swimming pool.

The 14-year-old boy then performed the underwater sequence with elan.

Siddharth will essay the role of younger version of the male lead in the Life OK show. The show is slated to go on air soon, but a date is yet to be locked.