Zee TV's Chhoti Bahu brought to fame Avinash Sachdev and Rubina Dilaik who are even today fondly known by their character names, of Dev and Radhika. The innocent love story of Dev and Radhika amidst the spiritual background was a super hit and gave a new momentum for early evening slots on the channel, and the viewers craved for more when the show abruptly shut shop in September. 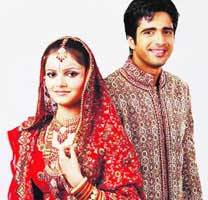 However, here is a good news for the loyal fans of the show, as the channel is planning a Season 2 of Chhoti Bahu.

Our industry source informs us, "The channel recently did a research on the popularity of the show, and got to know that Chhoti Bahu is missed by one and all. Based on the feedback got from the research, the channel has given its approval for the creative work to start on Season 2. In fact, the broad story line has already been worked out by the channel and creative team. The story will not continue from where it ended, and will have a brand new track".

The charm of the show, Avinash Sachdev and Rubina Dilaik, we hear will certainly be part of Season 2.

"Avinash and Rubina are the main reason for the show coming back. Though their basic characteristics have been retained, they will be seen in new avatars. The spirituality factor that worked wonders for Chhoti Bahu will also find place in the new story line", adds our source.

DJ's Creative Unit will be producing the show, and the writers of the first season of Chhoti Bahu, Shilpa and Sushil will be writing the story and screenplay for Season 2.

When contacted, Rubina Dilaik claimed that this was news to her and said, "I am hearing this news from you. I really do not know whether Chhoti Bahu is coming back. We have not got any official information yet. But I simply hope your news is true. If Season 2 is coming, I will love to be part of it".

Avinash Sachdev though said that he had heard this buzz, "Yes, I have also heard that a Season 2 of Chhoti Bahu is on the cards. But there is no official confirmation got as of now".

If sources are to be believed, the channel plans to launch the Season 2 of its very popular show early next year.

Our source informs us, "The channel wanted to get the show on floor by December end. But that is a bit too early, and the channel now hopes to see the launch of the show by January 2011. The channel is scheduled to make an official announcement of Chhoti Bahu's return in the Zee Rishtey Awards which will be aired very soon".

We tried calling Producer Tony Singh, and even sent him a text message, but did not get any response..

We also sent a text message to Sukesh Motwani, Fiction Head, Zee Tv but did not get a revert.

Guess this is happy news for Chhoti Bahu lovers!! Now let's look forward to the official announcement coming from the channel…

rishanew 10 years ago Choti Bahu 2 is just around the corner. I am so happy !

Avi adn Ruby are best...looking for them

10 years ago luv u both avina....missing u guys a lott

10 years ago All patience is running out .. I am dying to see Avina oncsreen nw !

10 years ago thanks..zee tv to give us confirmation of come back avinash and rubina in cb-2...hoping that the new love story between avinash and rubina as dev radhika will create magic again in our hearts...waiting fr the first promo..