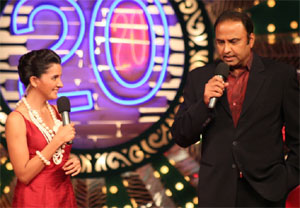 Sony's Comedy Circus 20-20 has gags, jokes, laughter, hilarious acts… all based on CRICKET…
So there is Ajay Jadeja judging and Vinod Kambli participating with the likes of Roshni Chopra, Nigar Khan and Rakshanda Khan.

But this Saturday, the show will have an additional googly when Charu Sharma joins the judges on this platform. This comes as good news for all cricket lovers and Roshni Chopra too… as her relation with Charu goes back a long way. Roshni instantly bonded like a house on fire. She says "Some of my initial assignments were with Charu and whatever I have learned of anchoring is because of him". This old association may come in handy for Ms. Chopra as Charu will be a special judge and shares comments on the acts.

Watch Charu do what he does best… but on a slightly different cricket pitch; this Saturday on Comedy Circus 20-20, April 11, 2009 at 9.30 pm only on Sony Entertainment Television.

+ 2
13 years ago thanxx! comedy circus is the funniest comedy show ever lol mwahh