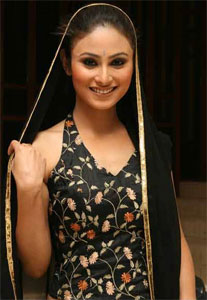 Mouni Roy, still remembered for her role as Krishna in Star Plus' Kyunki Saas Bhi Kabhi Bahu Thi, was dodging the fiction arena for a while and kept herself busy with reality shows like Pati, Patni aur Woh that aired on NDTV Imagine. However, the actress says that she was compelled to get back to fiction thanks to the simplicity of her character Roop in Zee TV's Do Saheliyan, that is to launch on March 1st at the 10.30 PM slot.

Mouni says, "I am a person who usually goes by instincts. After Kyunki, I just wanted to stay away from the monotony of fiction shows. But when I read the script for Do Saheliyan and got to know more about my character Roop, I instantly took a liking to her simple and unpretentious attitude. That's what majorly attracted me to the role."

Of course, there were other perks that were the reason for Mouni to sign for the role. "I love outdoor shoots and for this we had to shoot in Jaisalmer. So I was excited about working on this show. Also, the character Roop is very different from what I've done before. She has the guts to defy the utterly orthodox society she's brought up in and elope with the one she loves but still she's reticent. It was an amazing contradiction that I found appealing," she says.

So did Mouni shop a lot in Jaisalmer? "No, I couldn't do much of shopping there. Just picked a thing or two, that's all," she signs off.

Jatin Shah plays the love life of Mouni Roy in the show.

Mouni plays the cameo of Roop in Zee's Do Saheliyan…Kismat Ki Kathputliyan, produced by Chota Ganpati Telecreations, that premieres on 1st March at 10:30 pm on Zee TV.

AfghanLeena 10 years ago thanxxxx for artical love jatin shah he is sooo cute:) im frist one to say thanxxxx yahoooo

tpsn 11 years ago Oh! no, the person who wrote this article must be a Deepika's fan.Shame on you.
Sonam and ranbir are so cute couple.They are just beautiful.I think they are made for each other.Deepika came in between them.
Saawariya is a beautiful film.It is a love story between two innocent soul.I didn't like the ending only. I cried for them.
I love both sonam and Ranbir.It's really bad to write like this.Sonam might not like the script.
I love to see them again and again on screen .Good luck .

Jessuu 11 years ago U've got to be kidding me?! Dude they have only made one movie together..how are they a badluck jodi..someone please change the title of this article..please.

Riya07 11 years ago they make such a cute couple and i wish them all the best for their future and i really hope to see both of them in another movie soon :)

tsfme 11 years ago firstly..they have only made 1 film together
aur regardless of the outcome of the film
both are hot property..so that cannot be
termed as bad luck..now can it?

thirdly..Sonam n Ranbir are emotional
par not fools..regardless of their personal equation
they are aware that at this stage of their careers
they must tread carefully..aur choose films which
will help strengthen their hold..in the industry

Neelu.RoX 11 years ago Who writes these so called articles?

sheenakohli91 11 years ago Well i wouldn't call it luck its all based on the story. Sawariya was crap because of its super slow pace and the simplest storyline. so thats fot the blame not Sonabir...thts just absurd

Drew Barrymore Reunites With Ex-Husband After Not Speaking ...
48 minutes ago