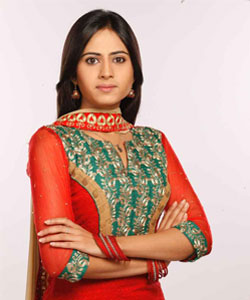 The entire cast and crew of Zee TV and Shreya Creations' Apno ke liye Geeta ka Dharmyudh had a horrifying experience today, when a mob came from nowhere and ransacked the set and even broke the window panes, AC etc.

According to our source, "The set of the show is set up in the rural area of Naigaon. It so happened that a production guy from the set adjacent to Apno ke Liye Geeta ka Dharmyudh got involved in a fight with one of the villagers. In no time, the entire village gathered there and created havoc in the sets of Geeta. They broke all the windows, AC panel, car windows and many other things. The situation turned from bad to worse, so much so that police had to intervene to get a hold of the situation".

We hear that the actors of the Zee show are still inside the set, and are trying to get out of the place. However, the situation is still hot out there and the entire crew feels that anything can happen at anytime. The shoot has also come to a standstill because of the fight.

When contacted, Sargun Mehta the protagonist of the show confirmed the news to TellyBuzz, and said "Yes, the situation had gone out of control. But the police has managed to calm down things. Actually a person from another set had a fight with a villager, but these people could not distinguish between the two sets and they literally got at us with vengeance. They have broken all our make-up rooms, windows, AC etc. We got petrified seeing the entire scene. I have to hang up now, as I am trying to get out and safely reach home".

We contacted Producer Sheel Kumar, but he remained unavailable for comments.

We hope the issue gets sorted soon with no further damage to any person or property!!