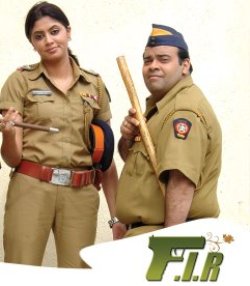 SAB TV's FIR is sticking to its tradition of innovative tracks, and once again will come up with a roller coaster ride where for the first time cops will join hands with road side brats to have a competition, to the very famous Indian game Lagori.

A source informs, "Soon a guy will file a case against his wife saying that she stands on the window and cheers the guys playing Lagori on the road side. After a long confrontation with her husband, his wife and the  road-side guys will play Lagori with Chandramukhi Chautala (Kavita Kaushik). They finally come to a conclusion that they will have a Lagori competition between them and if the guys loose the game they have to stop playing the game outside the house".

"Along with the whole gang Chandramukhi Chautala gets ready for the competition but right on the day, she gets some work and she remains absent. Eventually the whole burden comes on Raj Aryan (Ali Asgar). But due to the opposite party's cheating, Chandramukhi's gang is almost on the vergeof losing the game, and that is when Chandramukhi' comes there at the right time and turns the game in her team's favour and eventually the Police team wins," adds source.

The shoot for this Lagori sequence took place recently and the episode will air in the coming week.

We tried calling Kavita Kaushik and Ali Asgar but they remained unavailable while Kiku Sharda essaying Gulgule from the show confirmed the news.

That's really going to be a nail biting competition..

CC and her sidekicks rock

+ 2
10 years ago Anything can happen in Chandramukhi's police station!!!!