This week's celebrity prank was pulled of on the man with a heart of gold…or should we say a body-full of gold! The man in question -Bappi Da! The Chaalbaaz team decided to raid the 'K for Kishore' sets and attack the musician and judge on the show. 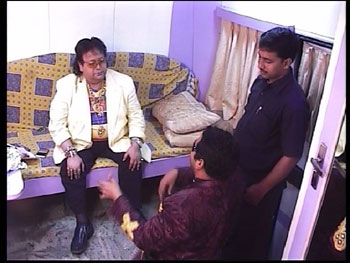 Featured Video
Here's what happened! A very persuasive Kishore fan dressed head to toe like Bappi Da in gold, enters his vanity van. The fan introduces himself as a staunch Kishore fan and to prove his bhakti…he auditions… The fan sings aloud a number of Kishore Kumar songs...in the most atrocious and besura version, needless to say it was a bad audition!

Bappi Da being Bappi Da gives in and praises the singer with his trademark "wah wah, bohot accha gaya, thoda mehnat karo"… he tries to convince the fan that he could not enter the show at this stage. The fan insists and does not give up; a frustrated Bappi Da is seen yet keeping his cool, a plastered smile and hearing him out!

The Climax just like our Hindi films has the fan's dukhyaari ma add some drama and melo-drama to the scene. Just like Mother India, she urges Bappi Da to give her son his only chance to make it big! Both the mother -son duo soon start removing the gold they have worn and offer it to Bappi Da….the situation gets tensed…

What happens to Bappi Da??? Does he give the singer a chance??? Watch this Chaalbaazi on Champion Chaalbaaz No 1, this Saturday, January 26 at 10.00 p.m. only on Sony Entertainment Television.

+ 2
14 years ago LOL wonder wat his reactions will be?

+ 2
14 years ago hahaha that is funny love to know what happens after.