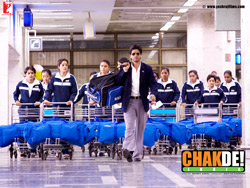 'Chak De' is making its mark in the most unexpected quarters. The latest admirer of the movie is none other than Shiv Sena Chief, Bal Thackeray himself. Apparently, he sent all his employees of 'Saamna' and 'Marmik' publications to Chitra Cinema at Dadar, for an afternoon show.

According to a source, "Bala Saheb watched the movie, and really liked it. He thought it was made beautifully, and that the characters were fantastic. He was very impressed by Shah Rukh Khan's performance, too."

This is the first time that all the employees of the above mentioned publications are watching a movie together. In fact, this dictate from the Chief was a pleasant surprise. Besides, most of them are anyway huge fans of the King Khan, adds the source.

It is believed that even Anil Ambani sent all his employees for the movie, as soon as it hit the theatres. First the Oscar library, then the official management lesson for most companies – looks like 'Chak De' has really made a difference.