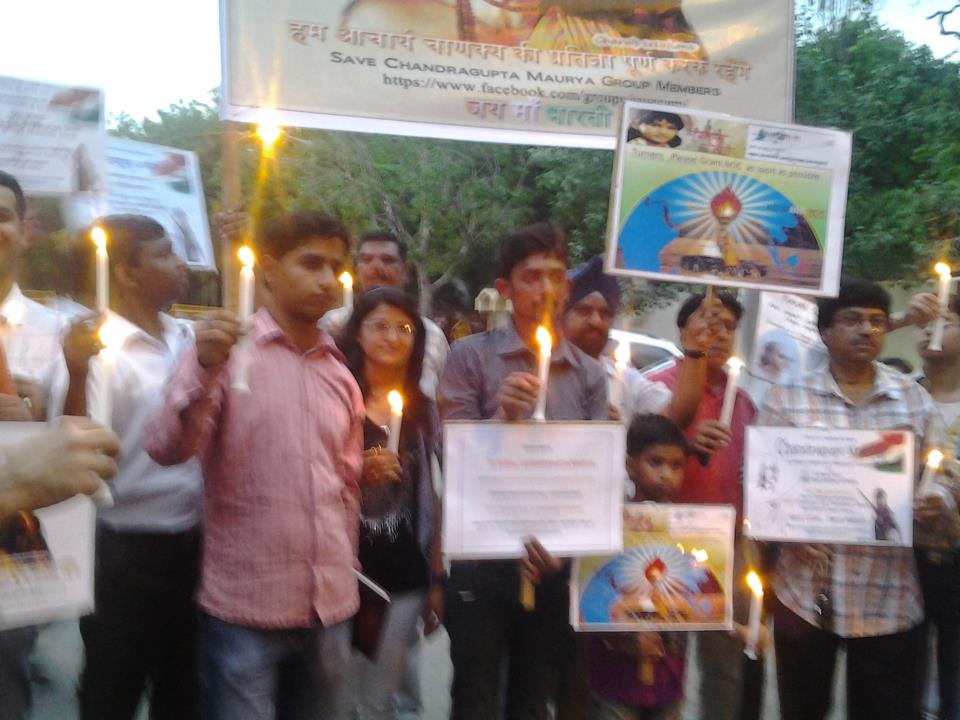 The news of Imagine TV going off air shocked the industry as well as the audience. The news of Chandragupta Maurya going off-air created a wave of sorrow among the fans of the show. Chandragupta Maurya that used to come on Imagine, gained a huge fan following. After the channel went off-air the fans started demanding the show to continue on some other channel.

Knowing the power of social networking, the fans of Chandragupta Maurya joined hands and created a group on facebook named SaveCgm. Earlier the show was expected to make its come back on Sony TV and fans are demanding for the same. Sony TV is ready to adopt this show, however the Imagine TV owners Turner Broadcasting has not given  NOC to the production house Sagar Arts.

Fans wish to see the show back on-screen and they held a candle light vigil at the historic Jantar Mantar in Delhi on 15th July in the evening from 6:30-8:30pm.

Fans are demanding that good historical shows like Chandragupta Maurya which connect with us with our glorious past should not be shut down like this. This was an epic historical show based on one of Greats Raj Guru in Indian history Chankya and one of the greatest kings in the Indian history Chandragupta Maurya. The show inspired lakhs of Indians.

We hope this candle light vigil managed to draw the attention of the concerned people and  the fans get to see their favorite show back on TV!.

Ubiquitos 8 years ago Channels shud pay heed to audience's voice!
All the best!!

smile.sara 8 years ago who these great people are??? Hats 0ff for them. ... hm tau ghar baith kar comments hi kartea he.. this is called the real struggle..

-nupur- 8 years ago Candle light march!!!
Seriously!?
Nice to see people stand unite for something they believe in, a thought. BUT, any day would have appreciated to see it done for a REAL cause that could make society, the real world a better place. Sigh!

Life_Is_Dutiful 8 years ago @rpuran,dey r not doing 4 da return of a saas bahu show or a heroine who left a successful show 4 money,dey r doing it 4 a return of a historical show which was left incomplete due 2 politics.As fans,dey r jst protesting peacefully and not writing angry/hate mails 2 da producers of da show.

Patrarekha 8 years ago the one reason that CGM should be back because that is 100 times better than some crappiest saas-bahu and love story drama running oer for years..in spite of we had some complains with the show its true that injustice is done with CGM and we are fighting against that injustice

Veni-Vidi-Vici 8 years ago It was a good show...a welcome change from run of the mill drama

-Eris- 8 years ago I liked the show:-) i hope it comes back on another channel:-)