View Profile
The enormity of the now-famous 'male-fantasy' photo-shoot of Neetu Chandra has hit her like a bolt from the blue. 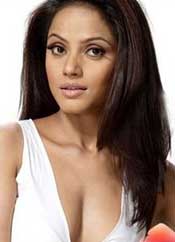 Featured Video
When Bollywood publicist Dale Bhagwagar first called up the actress to inform her that he will be handling the publicity for the photo-shoot as a project for The Man magazine, the actress didn't pay much heed. Neetu wasn't even aware that she was speaking to the same PR guru, who has earlier mastermind the branding of the likes of Priyanka Chopra, Shilpa Shetty and Sherlyn Chopra as 'Controversy Queens'.
Three days later, she was stunned, when she saw her super-hot photo-shoot images splashed across every newspaper, website and channel; suddenly realising, she was in the midst of a huge media hullabaloo. Thanks to the PR specialist, the upcoming actress hit national headlines like never before. The media was abuzz with controversial talks of her sexuality, lesbian connotations of the images and an impending Maharashtra Navnirman Sena (MNS) agitation threat.

Earlier, Neetu has done noteworthy films like 'Garam Masala', 'Traffic Signal' and 'Oye Lucky! Lucky Oye!' but hasn't witnessed a media storm like this… that too, all within a week. The seeds for a turnaround have now been sown.

Neetu can turn all this free national mileage worth crores of rupees into her favour, by grabbing the opportunity and spinning it to her advantage, or let it fizzle out with time. It will be interesting to see if she can manage to propel herself to the next level with this hot platform.