View Profile
This weekend SaReGaMaPa L’il Champs promises to be one action packed show. Saturday promises to be music lovers delight with special celebrity guests who will grace the sets for the first time. However, Fridays show was more reaction packed than musical and will leave the viewers totally shocked. 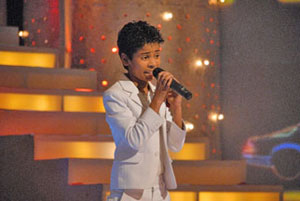 Featured Video
As the grand finale is drawing close, the Sa Re Ga Ma Pa Li'l champs fans wait with bated breath for every episode as one Li'l champ gets eliminated every week owing to the pattern of the show. In Friday's episode, even the presence of Ustaad Amjaad Ali Khan will not avert the chaos that breaks lose as soon as the results are announced and Amir Hafiz is declared eliminated. Aamir's elder brother and uncle created a major racket questioning the validity of the results and challenging the elimination of Amir over Rohan and Tanmay. When judges tried to clarify their stand, they refused to hear to any reasoning.
If Friday’s episode left one feeling disheartened then Saturday’s episode is sure to cheer up all. For the first time Bollywood heartthrobs – the gorgeous Kajol and the charismatic Ajay Devgan will grace the sets of any reality show. Incidentally the charming couples are also a biggest fan of this popular show. Also, accompanying them is Kajol's li'l sis Taanisha. They were there to promote their movie, soon to be released "U Me and Hum" which is also Ajay Devgan's first directorial venture. 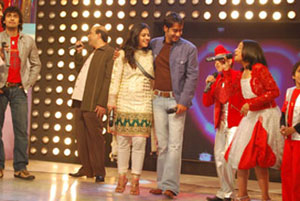 The stars were too excited about Ajay’s new venture and Kajol could not stop gushing about it. The Li'l champs all geared up to impress the stars and set the stage ablaze with some spell - bounding performances. The show stopper of the evening was Punjab da the Puttar - Rohanpreet, who made the otherwise fiery yet shy Kajol, literally dance to his tunes.
To catch up on all the action, please do not forget to tune in to Zee SaReGaMaPa Li’l Champs on Friday February 15th and Saturday February 16th at 10 PM IST.

14 years ago Won't comment on about Friday's episode... but looking forward to seeing Kajol and Ajay!

+ 3
14 years ago What happened on Friday should not have happened.The only one who will suffer the most out of this is Amir and his future. Shameful behavior.

Kajol and Ajay together on the sets.That wll be so cool. Seems like the performances of saturday will be good.Looking forward to that.

14 years ago Saturday seems to be 'Valentine's day' theme for the show from the costumes... Wud have preferred some other themes for a show featuring kids...

Looks like, Friday episode will be full of drama...