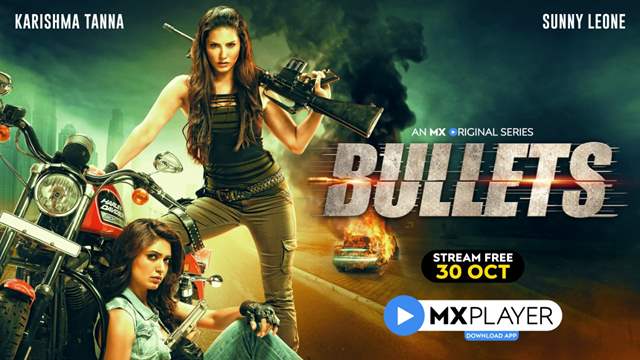 Two badass babes, high voltage action, nail-biting thrill, unlimited drama, and lots of oomph – all that and a lot more is what will be brought by MX Original Series ‘Bullets’, the trailer of which has dropped today. Starring two of the most fearless beauties, Sunny Leone and Karishma Tanna, the 6-part series goes live on MX Player on October 30, 2020.

Tina (Sunny Leone) and Lolo (Karishma Tanna) are bold, badass, and brave girls who find that one night changed life as they knew it. They’re on a quest to gather evidence that can thwart an illegal arms/weapons deal between two countries when a mishap occurs. The duo is suddenly up against an influential politician and they soon find themselves being chased not only by his goons but also by the police.

Taking on risks whilst on the run to save themselves, these women protagonists are faced with multiple hurdles - will they get arrested, will they get killed or will they be able to complete their mission?  Along with Sunny Leone & Karishma Tanna, this perfect masala entertainer also sees Deepak Tijori, Viveck Vaswani, Amaan F Khan, Taaha Shah & Mohan Kapur in pivotal roles and is directed by Devang Dholakia.