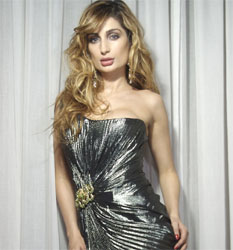 Featured Video
Don't mistake this belle for model Gauhar Khan's sister thou. This Negar is known for making a controversial entry as well as equally controversial exit from the Indian television scenario. Yes! It's the same Negar who debuted in a music video posing nude, got married to actor Sahil Khan, got an ugly divorce from him and finally got deported out of the country…

According to our source, "Negar was supposed to make an entry long time back. But due to glitches with her work permit it wasn't possible. And now that all those formalities are clear, finally she could make it."

Elaborating on her anticipation about entering the jungle, Negar says, "I am petrified of wild snakes and can't bear the thought of being around them. But from what I understand we will be given tasks to perform for our daily ration which will have its share of creepy-crawlies. Time to face my fears…"

And guess who she wants to support her in the jungle? Nope not her ex-husband Sahil Khan but Salman Khan!

13 years ago some entry she made.. she only got one star.. the rest of the campers are gonna starve now -.-

+ 5
13 years ago omg..what an entry she made...One Star! And she cant even be eliminated until next weeks elimination..phew..going to be two interesting weeks on IJSMB!

+ 2
13 years ago i think she is total misfit...not looking forward to her entry at all

14 years ago 'chori chori', 'dil hai ke manta nahin' ---i guess, every generation gets the taste of this movie...