From the makers of Amitabh Bachchan-Hema Malini starrer Baghban comes a heartwarming series, Sujata-- Ek Stree Ka Samarpan, on Sony Entertainment Television. Sujata is someone you can find in your home, in your family too… a complete homemaker, who takes charge of her home & family. There is nothing more important to her than her family. So like many other women she has sacrificed her dreams and aspirations, her youth for the sake of the family, without expecting anything in return. However in playing this pivotal role, she like most women have forgotten her identity and needs. 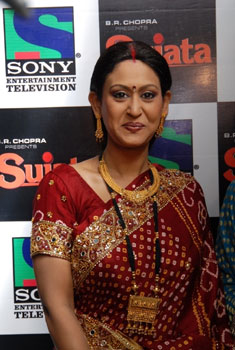 Featured Video
Time passes by ... she falls into a comfortable pattern of life constantly reaching out and nurturing her husband & kids and their wants and demands. Life seems timeless …until suddenly she finds herself standing alone! She enters the autumn of her life and she is still looking for the nest that she has built over the years.

It is then that she is faced with the truth-- her children have grown up; they have their own priorities and have little or no time for her. Her relationship with her husband, who is making a name for himself in the corporate world, has become more of a habit.

Today, her well-protected and nurtured nest is empty. She finds herself alone despite being the building block of her family. Why is she alone now when she needs her family the most? Why is there nobody, when she has given everything to the family?

Sujata - Ek stree ka samarpan is a poignant and heartwarming story of every Indian woman who finds herself standing alone, in spite of having an entire family around. The story is told through Sujata, played by talented and versatile actress Indrani Halder. Every woman in this stage of life will identify with Sujata and her journey. Every husband/child will also identify with the situation.

Commenting on the new show Sanjay Upadhayay, Head of Fiction, Sony Entertainment Television, said "We have always come up with clutter-breaking concepts and efforts that reinforce our belief of delivering differentiated, progressive and unique storylines on Indian Television. Sujata – Ek stree ka samarpan will be a refreshing change for all our viewers and will definitely create emotional engagement. Mid life crisis is common for most women and hence they will identify with Sujata.Coming from the B.R Films banner, the creators of mega blockbusters, I am sure it will keep viewers glued with its engrossing storyline and powerful characters".

Talking about the show Ravi Chopra, producer of the show said, "Sujata is a beautiful concept, it's a story of a woman who gets married, looks after her family and children… but by the time she reaches her 40s she faces mid-life crisis. The same family – her husband and children get involved in their own routine and have no time for her… the show attempts to find solutions to such problems faced by women who reach the autumn of their life. I'm very excited as the concept has shaped up well and has met our expectations. Sony Entertainment Television has always showcased different concepts and we are hoping this programme does well for both of us." 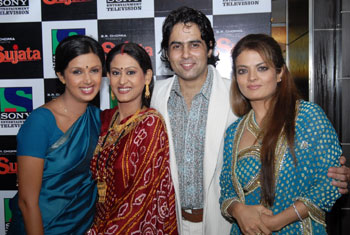 Seasoned actor Indrani Halder plays the central character. Sujata is also about endearing relationships about 3 childhood friends, Shaila, played by Divya Jagdale and Roshni, played by Sheeba. Despite the differences in their personalities and life styles, they have stuck by each other through thick and thin since college, cementing their bond with a common thread of despair and discontent in their personal relationships.

Sujata is the story of your mother, your wife & your sister.Tune in to Sony Entertainment Television Starting April 14, 2008 Monday to Thursday, at 10.00 p.m.

14 years ago Yes this show is very different from others

+ 8
14 years ago BR Chopra's shows are always different & that's what makes them stand apart. Looking forward to this show.

+ 3
14 years ago Seems to be somewhat different and interesting. Will definitely watch out for it.

And Indrani is a fab actress.

+ 5
14 years ago Thats fantastic. I used to love Kehna Hai Kuchh Mujhko...and I would love to see another show like that. Indrani is a fabulous actress. This happens to most women in their 40s. Kids grow up and hubbies get indifferent. Thats why women shd have their own careers and identities.

+ 3
14 years ago Hmmm, I wonder if that Ajay Chaudhary is the same one from Love Story? :) Shruti (Payal Sarkar) is coming in the other new show on Sony too, wow!

This reminds me of Kehna Hai Kuch Mujhko... but can we please have a mother who will stand up for herself, and not have a sad face all the time? I just hope they dont exaggerate things here... hmmm, i wouldnt say every woman can relate but then again i am not in that age group. Still... hopefully this show will be good.

+ 6
14 years ago Wow, one more Kehna Hai Kuch Mujhko... these kind of shows overdo their concepts. Its not like EVERY woman in their 40s go into midlife crisis and their families treat them cruelly or something.

If she's that depressed she shud try registering IF, she'll get so addicted that her family will go into midlife crisis cuz they'll think she's not spending enuf time with them :D

14 years ago Looks like a nice, simple stiry of a mother
Will surely watch this show.