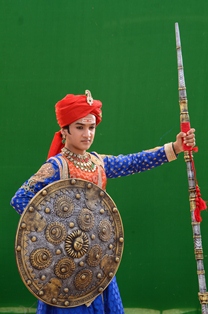 All work and no play makes Jack a dull boy! This saying is synonymous with the cast of Sony entertainment Television's Bharat Ka Veer Putra - Maharana Pratap as they have found a way to mix work with fun on their sets.

The current sequence on the show featuring the fierce battle between Mughals and Mewar is being shot at the borders of Gujarat and Mumbai and with the dipping temperature work has become difficult. But as they say, the show must go on!
The cast have found a very effective way to beat the chills and still have fun.

During breaks the cast and crew light a bonfire to keep themselves warm and also have a bit of fun by singing and sharing stories around it.

Now that's a cool idea to keep yourself warm!

Fiery 6 years ago Faisal Khan you have made me your die heart fan .

Droolicious 6 years ago Maharana pratap rocks and i love it !

Maharana pratap rocks and i love it !

Maharana pratap rocks and i love it !

Fiery 6 years ago Love Maharana pratap , its an awesome show and had great cast .

Faisal Khan, Shakti Anand and other actor are doing a very fine job !!

..Pankhudi.. 6 years ago Manarana Pratap is an awesome show ..its rocks and the whole cast is amazing . Glad to know they are enjoying themselves in during shoot !!

Marathi_Mulgi 6 years ago its very gr8 of them that they are working in such cold weather and find out way to enjoy in tht :)