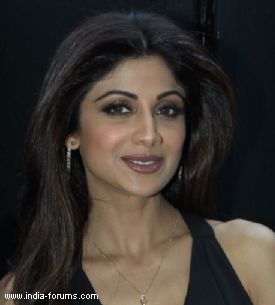 Shilpa Shetty, who is on the crest of a wave now, has jumped on the production bandwagon. The fate of the actress-fitness expert-businesswoman's maiden production venture "Dhishkiyaoon" will be decided March 28, but it is time to scan the success and failure ratio of her and other actresses who turned producers.

Here is the list of actresses who took a risk as producers:

Shilpa Shetty: For "Dishkiyaoon", Shilpa and producer Sunil Lulla have risked their money on Harman Baweja, who is yet to give a hit, and newcomer Ayesha Khanna. Sunny Deol, whose stakes are not on the rise right now, also stars in the actioner. They may be backing the wrong horse, but Shilpa seems to be confident and recently described the film as an "interesting masala entertainer on underworld". She has even tried to up the glamour quotient by featuring in an item number for the film.

Ameesha Patel: She became an overnight sensation post the release of "Kaho Naa... Pyaar Hai" and later repeated it with the success of "Gadar - Ek Prem Katha". She has also been part of box office successes like "Humraaz" and "Honeymoon Travels Pvt. Ltd", but later her career waned. Now she has turned producer and is trying to revive her sagging career with "Desi Magic", which is being directed by Mehul Atha. She will be seen with Zayed Khan and Sahil Shroff in it.

Dia Mirza: Model-turned-actress Dia has a few solo films to talk about, but she had her share of successes in hits like "Heyy Babyy", "Shootout At Lokhandwala", "Parineeta" and "Honeymoon Travels Pvt. Ltd." After the roles started drying up, she along with actor Zayed Khan launched her production house Born Free. Their first film was romantic comedy "Love, Breakups, Zindagi" (2011) and they played the lead role in it, but it tanked. Now Dia is trying to reboot with "Bobby Jasoos", a spy-thriller centred on a female detective played by Vidya Balan. She is hoping "Bobby Jasoos" is loved by viewers.

Preity Zinta: Preity's modelling and acting career has been pretty successful and thanks to hits like "Soldier" and "Kal Ho Naa Ho", she was a most sought after actress. When she tried her hand in business by becoming the co-owner of Kings XI IPL team along with ex-boyfriend Ness Wadia, Mohit Burman and Karan Paul, she did it with aplomb. But she burnt her fingers when she turned producer with "Ishkq In Paris" (2013), which saw a debacle at the box office despite her being in the female lead along with Rhehan Malliek.

Lara Dutta: A former beauty queen and star of hits like "No Entry" and "Partner", Lara floated her production house Bheegi Basanti with husband and tennis ace Mahesh Bhupathi and they came up trumps at the box office with their maiden production venture "Chalo Dilli" (2011), which also received critical acclaim.

Manisha Koirala: The "Saudagar" and "Bombay" fame Nepali beauty turned producer with "Paisa Vasool" (2004), but it wasn't a fruitful effort.

Hrishitaa Bhatt: She may have debuted opposite Shah Rukh Khan in "Asoka", but Hrishitaa couldn't climb higher on the success ladder as an actress. When she turned producer with "Shakal Pe Mat Jaa" (2011), a comedy directed by Shubh Mukherjee, she met the same fate.

Sushimita Sen: The former Miss Universe announced in 2007 that she will delve into production with English film "Jhansi Ki Rani", but it was later shelved. If reports are to be believed she may revive it as she has completed the writing part.

Juhi Chawla: Another beauty queen-turned actress tried her hand at production by teaming up with her co-star Shah Rukh Khan and filmmaker Aziz Mirza and launched Dreamz Unlimited. They made "Phir Bhi Dil Hai Hindustani" (2000), a social satire that had Shah Rukh-Juhi in the lead roles, while Mirza helmed it. But the dream team's first venture bombed. Juhi, who co-owns Kolkata Knight Riders IPL team with SRK and her husband Jai Mehta, said in an interview that Dreamz Unlimited was a very ambitious project that never happened and that everything does not happen according to a plan and you learn your lessons the hard way.

(Arpana can be contacted at [email protected] in)