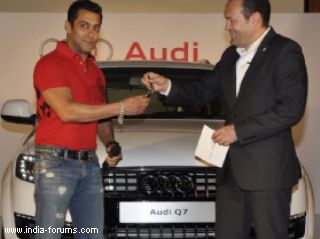 Audi India head Michael Perschke handed over the keys of the sleek white SUV to Salman at a function here in celebration of 'Bodyguard' emerging as one of the top Bollywood grossers of 2011.

'Both stars of the movie, Salman and Kareena Kapoor, had extensively used the Audi Q7 and Audi ASL to zoom around in 'Bodyguard',' said an official.