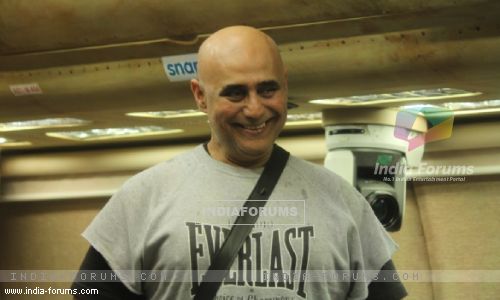 TellyBuzz have been constantly reporting about what next will be showcased in the most controversial house of Colors Bigg Boss 8. Recently, we had updated the rivalry that has struck between the inmates and the love that has bloomed.

Well, next exclusive piece of information that we have with us is that of an hilarious encounter of Puneet Issar with singer Anu Malik.
Our source informs, "Puneet Issar and Anu Malik were in one of Mumbai's leading college together where Anu Malik once thought that Puneet had an attitude problem. Learning this fact, Anu had hired a few Gunda boys to beat up Puneet not knowing the fact that Puneet was a black belt in Karate and professionally skilled at Martial arts. When the Gunda boys came in to beat Puneet, he instead beat all the boys owing to which Anu Malik got extremely scared. Puneet checked in all classrooms, the whole of campus and canteen too but he did not find Anu anywhere. Eventually when Puneet thought that he will see him the next day in college and rushed for home, he found Anu Malik with his mother asking her to save him from Puneet."
Surely this was an hilarious one Puneet and Anu!
Keep reading this space for more updates on your favorite shows