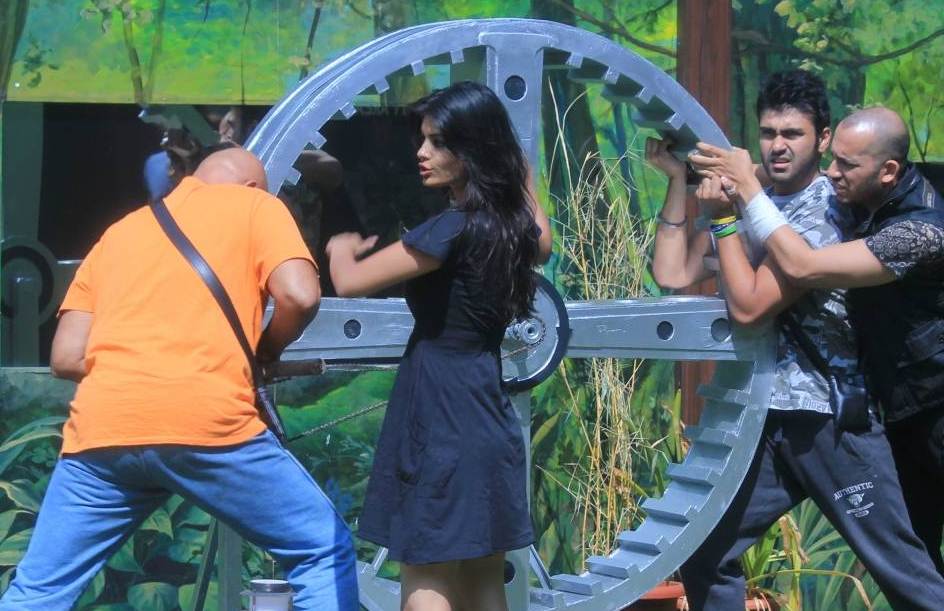 With the new week, new task has begun in Colors' Bigg Boss 8. This luxury task will be named as 'Unchi Hai Building'. According to the task, the housemates are divided into two teams- A and B,  one team includes - Diandra Soares, Praneet Bhatt, Karishma Tanna, Arya Babbar and Ali Quli Mirza,  whereas another team includes - Puneet Issar, Gautam Gulati, Pritam Singh, Sonali Raut and Sushant Divgikar.

These two teams are supposed to make individual buildings and captain Upen Patel in the end will decide which team's building is taller. While the team is busy in building, the other team is supposed to stop them and at a same time the other teammates will be busy to rotate the wheel.

As soon as the alarm rings Puneet's team will pounce on the given materials and will start to make the building, while Puneet will be busy in the other task. Everything was going just fine when Arya Babbar will step into the scene and will try and stop Puneet to run the chakki. Due to this things went haywire and it lead to a fight.

Puneet and Arya indulged into a major fight owing to this task.

Tuba_KSG 6 years ago i hate puneet .. not at all good for the house environment , always bitch about other contestant

Desi-Videsi 6 years ago Big Boss should bring back Puneet, if they punished him for physical violence then they should punish Arya and Ali for using physical violence on Gautama.
Karishma needs to go, she is such a nasty person, can't believe she chose her makeup over her friend! Hope they remember this and nominate her. She is too sly.

justprati 9 years ago luv u geneia...ur one of d most strong n cute actresses in d industry...all d best

pesi11 9 years ago this is half truth .she is not banned. MAA announced that she has been given notice for not having the membership.. If she dont respond by december she will be banned

hopper_ocean 9 years ago ahhh hope its not true ... will miss her if it is. She is such a cutie talented actress

RadiantTreasure 9 years ago One more ban!Ah!I think MAA should come up with an easy solution regarding this especially to artists who work in different languages instead of just appling ban to all actors who are talented.
Well i wish Genelia comes out of this soon n we see her many movies down south.
Right now waiting for the one with her n Rana Daggbatti.

supercool3 9 years ago definitely a rumour

Genelia is a good actress as well as very professional