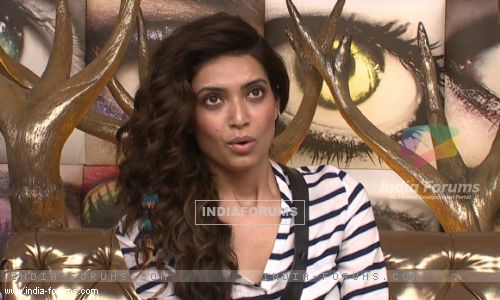 As Karishma Tanna dislikes Puneet in Colors' popular reality show Bigg Boss 8, she will now be seen ignoring Puneet's task having a fear of Puneet being safe.

We heard that, "As the contestants are accomplishing their Luxury Budget Phone Booth task in Colors' popular reality show Bigg Boss 8, Puneet is replaced by Karishma and he is been given a task to convince Diandra Soares and Karishma for giving up all their cosmetics and put them in the store room. Following the task, Puneet first convince Diandra for it and then he asks her to convince Karishma for doing so. After getting convinced by Puneet, Karishma agreed first and both the girls put up their makeup items in the store room."

Further, we also heard that, "After keeping her cosmetic items in the store room, Karishma realized that Puneet will be saved after they will accomplish the task so after speaking to Diandra about it, Karishma takes out her things from the store room again."

6 years ago I feel wateve groups r dere in big boss house...one should play with sporty spirit...karishma is coward. ..she did her task nd nowshe is trying ruin others task.
Wen she was abused by gautam she created a melo drama nw wen ali touched sonali she said dt sonali is stretching d matter unnecessarily. A woman should respect other woman's dignity atleast...evn if dey are enemies.
Atleast sonali is better dan other girls she is facing all d situations alone..I guess she is very bold

6 years ago Karishma is not insecure, she is doing this to save herself.. Puneet deserves to be nominated

+ 3
6 years ago @veeranu - She's being selfish because she wants to eliminate her opponents? I may not like her, but that doesn't mean you can bash her for everything she does. I don't see what wrong she did here :/

+ 4
6 years ago Good.. i donot want puneet to be saved. i want him out of house this week

+ 4
6 years ago Karishma !! When will u get out of the house ?? U r insecure abt P3G because they have fans more and many in number and they are people's favourite... How selfish and cheap !!!

9 years ago luved gaga's poker face song. she was awesome and she actually looked pretty in that music video(the pic that is being shown).

+ 7
9 years ago gaga is a very interesting girl... very creative... and very deep with emotion.. her interview defo said that..

+ 3
9 years ago Lady GaGa is a very nice and caring person, though i don't like SRK GaGa, I LOVES YOUU girl! keep rocking &lt;3

+ 5
9 years ago Although SRK is my fav actor, but lady gaga wht shud i say, i really don't like her.