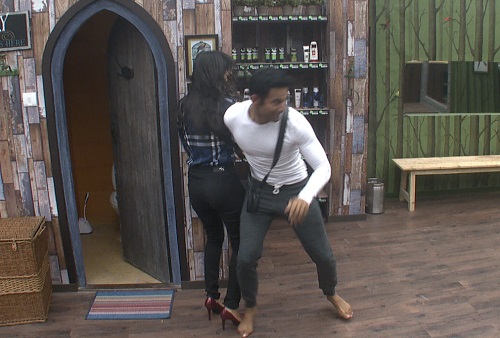 Our source informed us, "This time, the teams will be divided into two teams headed by Minisha Lamba and Arya Babbar. Minissha Lamba's team will be known as Lamba family consisting Upen, Sushant, Gautam, Praneet, Deepshikha and Pritam. Whereas Arya's team will be known as the Babbar family having Soni, Karishma, Puneet, Diandra, Sonali and Natasha in the team. Following the task, Upen and Sonali ran and locked themselves in the washroom after the task was announces. Arya, ran and broke the door of the washroom to get them out. Arya was then called in the confession room by the Bigg Boss and asked not to destroy the property of the house."

"After sometime, Upen tells everyone that he is going for a shower and locked himself with Sonali inside the washroom for 10 minutes and wins the task," adds our source.

Seems quite a fun task ahead!