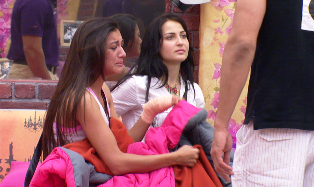 Finally after two days, the luxury budget task Chor-Police nears completion and the housemates breathe a sigh of relief. However, just as they think, that they have successfully completed the task assigned to them, Bigg Boss introduces another twist leading to an additional secret task for the chor gang. Bigg Boss calls Kamya to the Confession Room and, with reference to the task, gives her some cue cards along with two trays that are labeled Return' and Give Away'.

Each cue card has the names of the items that were stolen during the course of the task by VJ Andy, Sofia Hayat, Tanisha Mukherjee and Ajaz Khan. Kamya Punjabi is asked to read out the names on the cue cards to these four chor' contestants who then divide them between the two trays after arriving at a mutual consensus. 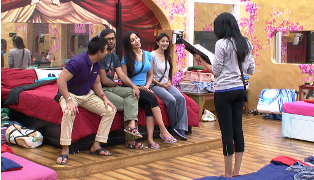 As all the items are personal belongings of four police' contestants, it is quite tough for Andy, Sofia, Tanisha and Ajaz to arrive at a decision. However, after much contemplation, they decide to give away Elli's lip gloss, Armaan Kohli's towel, and Gauhar's photo frame along with a white coffee mug to earn an additional 1000 points.

When Bigg Boss reveals this secret task to other housemates, Gauhar Khan is shattered to hear that her personal belongings with which she is emotionally attached are sacrificed for the sake of a few extra points. She further taunts Tanisha, Ajaz, Andy and Sofia over their decision and sheds some tears. She also refuses to take part in the luxury budget discussion and rushes to the washroom. While it is not in anybody's control to get the items back after the final decision has been taken Andy, Ajaz, Sofia and Tanisha express deep regret for their decision.

Will Gauhar get her possessions back?

-veena.shona- 9 years ago lvd each n every scene of K3G
i knw each scene n dialog by heart :)

..KaJenDelena.. 9 years ago Love this movie, SRK-KAJOL pair is just mindblowing! didnt like kareena's character at all but it didnt effect the amaizingness of the movie at all. Kajols character was soooo LOVEABLE! Bollywood should make movies like K3G, Devdas, Hum dil de chucke sanam, veer- zara,hera- peri,om- shanti-om and dhadkan, dont see any of these kind anymore :(. Bollywood lost its charm 4 me/ its all about item girls, stupid raps and meaningless stories.

chibi_deea 9 years ago It's my favourite film. I love it. My favourite scene is the one where the characters sing Bole Chudiyan.

AASUS 9 years ago All characters were great but Pooh played by Kareena Kapoor stood out the most. Her comic timing was great :)

pallavi25 9 years ago I loved Jaya's dialog at the end when she gives it back to meanie Amitabh :Mainey keh diya toh keh diya, Buss!
And SRK telling his mom abt Kajol: Zara nahin, poori pagal hai! LOL
Suraj Hua Madhyam is one of the best songs of all time!
Kajol was absolutely adorable in the movie.

untilwhenever21 9 years ago All the SrKajol scenes. Simply amazing this pairing.

Best movie of all times, haha

Naagin 5: Veer to return to destroy Bani and Jay?
3 minutes ago

Jaya Saha to be Arrested by the NCB Soon: Report
44 minutes ago