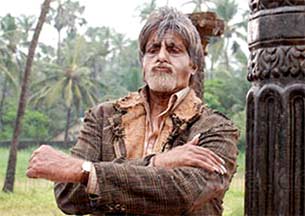 Megastar Amitabh Bachchan, currently filming for his upcoming movie "Bhoothnath Returns", shot a dance sequence for the movie and later said he feels that the choreographers sometimes forget he is "old to be still doing this stuff".

"Grooving and shaking with the young at the shoot for 'Bhoothnath Returns', at times the choreographer and the production forget how old I am to be still doing this stuff ... But to be honest I did enjoy myself, despite the buckets of perspiration after each approaching summer heat-filled shot," Amitabh posted on his blog srbachchan.tumblr.com Sunday.

The 71-year-old further said that after so much of dancing he does not regret missing the gym.

"And then, of course, the no regrets of not being able to gym, since, the workout during the song was enough to keep me going for a decade!" he added.

"Bhoothnath Returns" is a sequel to the 2008 horror comedy film "Bhoothnath" that also featured Juhi Chawla.