Rajan Shahi's Sapna Babul Ka Bidaai has retained its numero uno position, and in fact gotten better post the stoppage in fresh content on television owing to the strike. 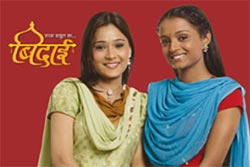 Featured Video
Bidaai got an average TRP of 7.3 in the first week of airing of fresh episodes. “We were all so tensed when the strike was on, and thought it would be tough to get the audience back to the show. I’m very happy that Bidaai managed to do even better and we got a good TRP in the first week, with Thursday’s episode surpassing the TRP mark of 8,” quips Rajan Shahi, Producer, Bidaai.

“We are heading towards the wedding of Ranvir and Ragini and I’m glad the take-off to this highpoint has been appreciated by viewers,” adds Rajan.

He further says, “The whole unit is very happy with this morale boost. I thank the team, the writers especially who took the story to a new high. Bigger good news is that the story ahead will see some beautiful moments, as well as emotional and dramatic sequences with the two families getting together. The track will now focus on the marriage and problems associated with it. So viewers have to wait to know what’s next”.

13 years ago That''s great! Angad and sarah is a rocking pair!!

bella** 13 years ago I love Badai, especially Angad and Sara. They are the cutest jodi.

vini34 13 years ago i love bidaai because it is such a natural story line. i love Ranbir, Ragni, Sadhana and all the most alek. he is soooooooooo cute and innocent in his acting. i wish bidaai all the best and hope it stays number 1 show in the television showbiz.

lets see tht wiil it be able to do so ...further

13 years ago this is one serial that deserves all the success in the world!! no scheming bahus or anything..plain simple n realistic enough to touch your heart...what u want to happen happens...n that''s the reason that its working so well...keep rocking bidaai...i kno that ranbir ragini''s marriage is going to b beyond amazing for sure!!

13 years ago I also love the lead couple of the show Alekh and Sadhna. Congrats to the bidaai team.