Star Plus and Rajan Shahi's Directors Kut have indeed captured the locales of Kerala beautifully in Sapna Babul Ka.. Bidaai. The blossoming of love between the newly weds Ranveer and Ragini has indeed been a delight to watch, and the track ahead is sure to keep the audiences glued. 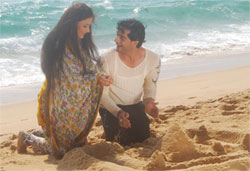 Featured Video
But the buzz is that there was a one-off incident that occurred on the last day of shoot in Kerala which left the unit and cast members unhappy.

According to our very reliable source, "When Sara-Angad mermaid scene was being shot, few localites tried to disrupt work, and claimed that the channel did not have adequate permission to shoot in that particular area of the beach. They even had an argument with the lead actress of the show Sara Khan which made things worse".

"Because of this interruption in shoot, it is heard that the mermaid sequence could not be shot fully and thus was not aired in the episode", adds our source.

Contradictory to reports, our source from the channel claims that, "The fishermen in that area of the beach planned to make some quick bucks, and started arguing with our unit members claiming that they could not shoot at that place. Their main aim was to amass as much of money as possible from the unit there.. All was sorted out when they got paid. But no actor was involved in this incident, and news about Sara being targeted is completely false".

We talked to Sara on this, and the actress too rubbished such stories and said, "No such incident happened where I was involved. The entire shoot went well and we had no problems whatsoever".

Well, whatever it is, the cute Kerala sequences have surely brought smiles on the viewers' faces!!

CBKVBSJSN 13 years ago I WOULD SAY THAT SARA DON''T HAVE TO SAY ANYTHING.

+ 4
13 years ago OH, thats reallly so sad , but thanks for the article

13 years ago that''s horrible .. but glad that everything was alright in the end!

+ 9
13 years ago I wish they could have shown mermaid part in the show!!

+ 5
13 years ago Aww That''s Sad, I Hope Sara is Okaii And Nothing Happen bad, So I Guess this Beautiful Moment of Salekh Could not be Seen !
But I Still am sure whatever they are shooting and Airing for us is great can''t wait to see, Kerala Scenes in UK Soon !