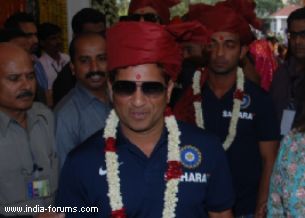 Cricket legend Sachin Tendulkar will be awarded the Bharat Ratna and legendary playback singer Lata Mangeshkar, who was accorded the country's top-most civilian honour in 2001, couldn't contain her joy and excitement on hearing the news.

The government made the Bharat Ratna announcement soon after Tendulkar walked out of the pavilion after playing his 200th Test match in Mumbai. Crowned with India's top civilian honour, Tendulkar goes down in history as the first sportsperson and the youngest recipient of the award till date, surpassing late prime minister Rajiv Gandhi's record.

"Right now the public's emotions and sentiments for Sachin are at the highest peak. On Friday, Sachin walked out of the field for the last time. The nation wept to see him go. Believe me, I've never seen anything like this before. The emotional farewell for Sachin has now been endorsed by the Bharat Ratna. I am very happy he received it now when he is so young and has so many years ahead to enjoy the honour," said Lata.

But Tendulkar's decision to retire at 40 rankles Lata.

"I still say, Sachin had a few years of very good cricket within him. And I am sure everyone agrees with me. The crowds at the Wankhede Stadium were cheering for Sachin as though they wanted him to go on playing."

"When after his farewell match, someone asked me how long Sachin could have gone on playing, I said he should've played for another year. But now I feel he could have played for two more years at least," said Lata.