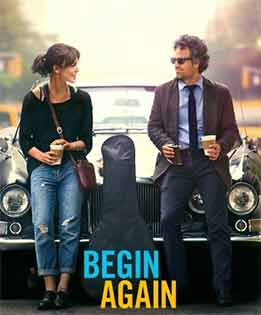 Previously released as "Can a Song Save Your Life", "Begin Again" is so much like an average Hindi film, full of fluff, seriously into music and light on romance.

The film shadows Greta (Keira Knightley), a songwriter who follows Dave Kohl (Adam Levine), her musician boyfriend of five years to New York City at the start of his career and ends up heartbroken, alone and unsure of her future, when he makes it big.

Disillusioned, she moves in with her good friend Steve (James Cordon). He is also a performer and at one of his club gigs he gets her to sing one of her songs. She sings half-heartedly, but the music is so good that Dan (Mark Ruffalo), a down-on-his-luck music producer who happens to be at the club at the same time, envisions the unused instruments suddenly supplying accompaniment by playing themselves.

He approaches her to sign for a record together, she agrees. And it's this journey where they change each other's lives which form the crux of the story.

This star-driven romantic drama released under the PVR Director's Rare Banner is unique in its own unpretentious way. Like a regular Bollywood film, director John Carney has used songs for the story progression but what elevates it is the initial narration style, where the first few scenes are repeated thrice, each time from a different perspective.

Once you have seen the three versions which furnish the backstory, you become engrossed with the relationships of the characters and feel as though you are on this journey with them.

With all the plot possibilities that end up being the right choices, the storyline and characters may sound cliched and the music lackluster, it's the idea of a chance meeting that can change the course of one's life is what makes the film acceptable.

The film is packed with little vignettes that realistically portray the music industry. But it's the guessing game, the never-quite-sure sparks between Greta and Dan, will they actually fall in love is what makes the script a bit unconventional. It's reminiscent of director John Carney's previous showbiz drama "Once".

Mark Ruffalo and Keira Knightley's chemistry is really what highlights this film. Knightley is charming as Greta. She portrays her anger and anguish with equal ease and if she sang the songs herself, kudos to her. Ruffalo doesn't sing in his role but he does show more charisma than he ever has. With a mop of curly hair and a slouchy, rumpled demeanor, he is the perfect picture of Dan, a man on a downward slide.

They are ably supported by Catherine Keener as Dan's wife and Hailee Steinfeld as his daughter.

The only odd one out here is Adam Levine, who seems inexperienced as an actor in some scenes. At times he is clumsy and his make-up, especially his beard is tacky.

The visuals and production quality are fairly good. A few jerky edits at the initial stage mars the flow but picks up momentum due to the strong script and powerful performances.

Overall, the film with its unconventional choices in the relationships combined with actual songs makes it a simply feel-good film.