The arrest of Kuku Narang (Kanwaljeet Singh) and his wife, followed by the court case, and the ultimate revelation resulting in the arrest of Gursheel (Jayati Bhatia) and Goldie in Star Plus' Sabki Laadli Bebo has given a rise to the ratings of the show. 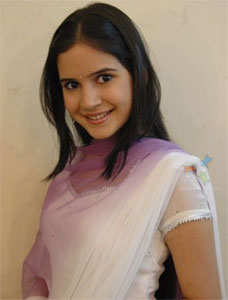 Featured Video
And now, viewers will see a new twist with a look-alike of Bebo (Shivshakti Sachdev) entering the show.

Tonight's episode will air the look-alike's entry. According to our source, "The look-alike of Bebo is Rano who is a C-grade dancer who does item numbers. She also plays a junior artist in a film. Amrit (Anuj Sachdeva) goes to Chandigarh on an official work where the girl Rano will be seen. She happens to be one of the dancers in the shoot happening on sets".

Anuj Sachdeva confirmed the news and said, "Yes, it is true that a look-alike of Bebo enters the show. She will be seen in Chandigarh where she is a dancer at a shoot place, where I go to".

As per our source, "There will be hilarious situations as the real Bebo also comes to the same sets looking for Amrit. Both the girls will not come face to face, but will be shown at the same place. The change in their costume and dress creates a major confusion, which will test the wits of the co-ordinator who is organizing the shoot".

We tried calling Shivshakti Sachdev, but she remained unavailable.

Get ready for yet another major drama in Sabki Laadli Bebo…

+ 2
12 years ago OMG great! just great! what else is left to happen??
One problem gets solved and another comes..=(
why cant Amirt-bebo live peaceful??
this act is soo old!
how many more drama's r gonna do this stupid twins and clones stuff!

12 years ago Wow.... quite original. LOL:D After reading this, I feel that the creatives of bebo should be fired.

12 years ago i started watching this show since everything getting sorted out
but now it seems all the creatives can think of is someone comming to steal bebo's property and thats it ..
i feel like its another kumkum story
where chanda came in as a bad women but turned out later to help kuumkum

+ 5
12 years ago its the same stry tats goin on in every serial..lookalikes n reincarnation..wat nonsense