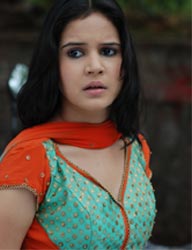 The present story line is focusing on Bebo getting back her memory. In the next few episodes, she will indeed regain her memory, but has a long way to go before she exposes her look-alike and gets back the love of her near and dear ones.

According to our source, "Gursheel (Jayati Bhatia) and Rano are trying their best to keep Bebo away from her family members, because they sense that she is closer to regaining her memory. On the other hand, Amrit (Anuj Sachdeva) gets pulled towards the real Bebo and realizes that there is something that connects him to her. Amrit also finds Rano's behaviour very weird and is forced to think that the other girl might be his Bebo".

"Amidst all this, Bebo will get back her memory and will decide to take revenge against Rano. Viewers will see a stronger Bebo who will want to give it back to her look-alike for all the sins she has committed so far. Though the script has not been made final on how Bebo will actually go about taking revenge, there is also a possibility of high drama when Bebo will get to know that Rano is in fact related to her", informs our source.

"There is some more time for Rano's track to reach its culmination, but we are surely proceeding there:, informs our source.

We tried calling Shivshakti Sachdev, but she remained unavailable..

10 years ago i'm so happy! i love this show especially bebo!

10 years ago Omgg!! Yay! I'm soo happy Bebo's getting her memory back!!! Can't wait!:P This is getting soo interesting!

+ 3
10 years ago wow finally bebo will get her memory back ....the future track sounds really interesting... waiting for the episode

10 years ago I am so happy she is gettig her memory back.I could not see her like that. It is ok to see her fight against the wrong but here she doesn't know what is wrong.

10 years ago Thank God creatives thought of giving bebo her memory back.