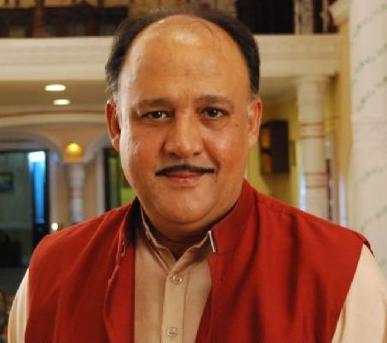 The actor, known for his fatherly roles in films like Maine Pyar Kiya, Hum Saath-Saath Hain and Vivaah and TV shows like Piya Ka Ghar and Astitva Ek Prem Kahani, has no qualms about people cracking jokes on him or his popular character Babuji.

In the last six months, there have been close to 2,00,000 tweets about him and his character.

And now, he is looking forward to connect with his fans on Twitter.

"I'm excited to join Twitter since people have popularized my character on it and I'm happy to now finally share the real Alok Nath with the world. It feels like there was a party thrown in my honor and I didn't attend."

"So I'm attending now, fashionably later than never and I'm looking forward to engaging with my fans and friends in real-time," he said in a statement.

His first tweet via Twitter handle @aloknath also started with a pranaam (respectful Indian greeting made by putting one's palms together).

"Pranaam Twitter world! Finally attending the party you guys threw for me. Let's hope it's a good one. Cheers!" he tweeted.

The actor is set to play "Babuji" again for a new family comedy series Tu Mere Agal Bagal Hai. Produced by FRAMES and directed by Rajan Waghdhare, the show will hit SAB TV from July 7.

-ialwayswill- 9 years ago The songs are really nice, hope the movie fares well too. although Emraan's songs have always been a hit :P
I dont know i think Mallika would be better. but lets see Jacqueline :]

R1U2K3 9 years ago Love Emraan Hashmi. Love that every song that is pictured on him. <3

sali195 9 years ago I don't like emraan hashmi so i never watch his films but i think that i will have to make an exception to this and watch the movie, as this film looks quite exciting and the story also looks quite interesting. I just hope it isn't a copy of a hollywood movie like saw or hostel.

.AngadKripa. 9 years ago i can't wait to watch this movie! Emraan and Jacqueline look HOT together

psycho_angel 9 years ago why Emran Hashmi everytime?not just Jaqueline,even Mallika deserves a hotter costar than THAT

RashiGT 9 years ago Murder2 is a way better than Murder1... Coz it has Jacqueline and not that "cheapo Mallika sherawat"... Moreova music is really lovely!!